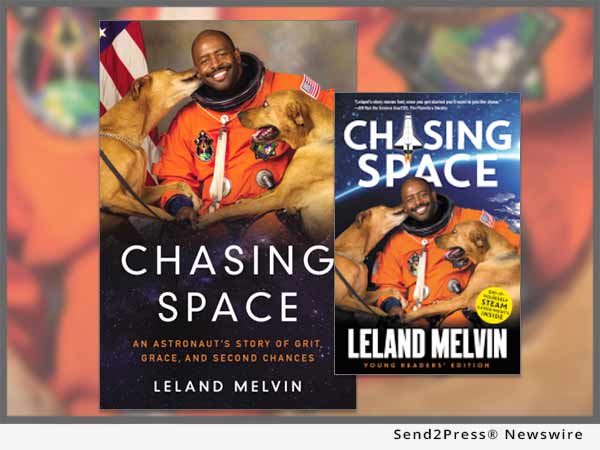 NEW YORK, N.Y., May 19, 2017 (SEND2PRESS NEWSWIRE) — Retired pro football player Leland Melvin thought his road to the NFL was an incredible journey – until he climbed aboard the shuttle Atlantis and traveled to outer space. Twice. Melvin, a former wide receiver for the Detroit Lions, engineer and astronaut, shares his real-life experiences, triumphs and challenges in an inspirational memoir. The book: “CHASING SPACE: AN ASTRONAUT’S STORY OF GRIT, GRACE, AND SECOND CHANCES” (ISBN: 978-0062496720; Amistad Hardcover Original).

Leland, who was named the NASA Associate Administrator for Education, and served as co-chair on the White House’s Federal Coordination in Science, Technology, Engineering, and Mathematics (STEM) Education Task Force penned a version of his book for children, “CHASING SPACE YOUNG READERS’ VERSION.” This version also includes hands-on experiments and activities for boys and girls ages 8-12.

“CHASING SPACE” is a poignant story of Leland’s personal journey from the end zone to outer space and back. He is the only person in history to have played for the National Football League and serve as mission specialist for two flights aboard the shuttle Atlantis, working on the International Space Station. His remarkable testimony is a must-read for adults and children.

“The more that I thought about it this journey of a skinny Black kid, from a small southern town going to space and with all the other things happening in our country and the world, what better way to tell a story of inspiration, hope and second chances, and doing it in with grace,” says Leland, a native of Lynchburg, Virginia whose parents were longtime educators in the local school system.

I hope you will consider “CHASING SPACE” and Leland Melvin for review, interview, and feature on debut authors. Social media hashtag: #ChasingSpace.

ABOUT THE AUTHOR:
Leland Melvin, a former wide receiver for the Detroit Lions, engineer and NASA astronaut. He served on the space shuttle Atlantis as a mission specialist and was named the NASA Associate Administrator for Education in October 2010. He also served as the co-chair on the White House’s Federal Coordination in Science, Technology, Engineering, and Mathematics (STEM) Education Task Force, developing the nation’s five-year STEM education plan.

In Spring 2018, he will appear in “One Strange Rock,” a National Geographic Channel event series that explores life on Earth and its rarity in the universe. He was the host of the Lifetime show “Child Genius” and a judge for ABC’s “BattleBots.” He holds four honorary doctorates and has received the NFL Players Association Award of Excellence. He lives in Lynchburg, Virginia.

This press release was issued on behalf of the news source, who is solely responsible for its accuracy, by Send2Press Newswire. To view the original story, visit: https://www.send2press.com/wire/chasing-space-an-astronauts-story-of-grit-grace-and-second-chances-by-leland-melvin/