With an ugly mixture of bigotry, misogyny, ignorance, and lunacy, Donald Trump is the perfect representation of conservatism. 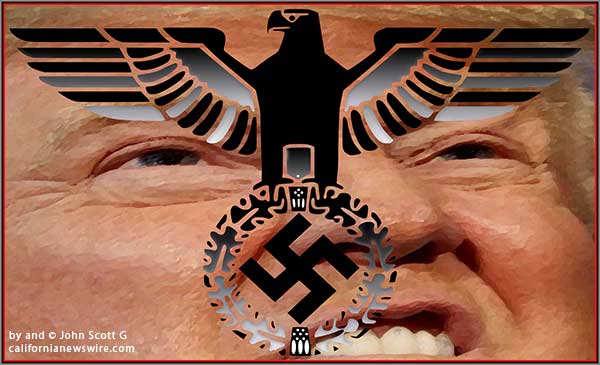 Now that Donald Trump has emerged as the presumptive presidential nominee for the Republican Party, there are alarm bells going off inside anyone with a soul or an I.Q. above 80. There are so many things to fear:

* How fast will Trump remove healthcare from millions of Americans?

* Will he make the global financial markets collapse immediately or will it take a few months before he flushes everything down the drain?

* How many U.S. allies will Trump insult per month? Per week? Per day?

* Which of Trump’s idiotic ideas will start first — mass deportations or that damn wall?

* When will Trump start his first trade war?

* When will Trump start his first regional war?

* When will Trump start the next world war?

I can’t help fantasizing about the Trumpenstein monster getting fed up one day and ordering the Pentagon into action. Picking up a White House phone, the commander-in-chief tells the Chairman of the Joint Chiefs of Staff, “Launch drone strikes now!”

“Right away, Mr. President. Launch them on who?” asks the Chairman.

“On everybody, damn it!” And then Trumpenstein would cut the connection, chow down on a steak, send out some insulting tweets, and turn in for the night.

As an aside, I still don’t know why Obama didn’t used drones to take out the know-nothings and traitorous obstructionists in Congress as well as the four remaining human turds on the Supreme Court. What a wonderful press conference would result from that:

“It is with great regret that I have to inform the American people of this tragedy and want to extend our most sincere condolences to the families of Messrs. Ryan, McConnell, McCarthy, Cruz, Scalise, Chaffetz, Inhofe, Gowdy, Cornyn, Issa, Gohmert, Cotton, Roberts, Alito, Kennedy, and Thomas.”

That is certainly what I would do and it is impossible to avoid wondering which candidates would be most likely to succumb to the same temptation. Obama had too much control for this. Hillary has too much control for this. But rageaholic Trump? Man-oh-man we all need to worry, especially since he would spare the troglodytes mentioned above and attack some of the sane people in government.

If Trumpenstein is elected, there is a litany of horror waiting for the American people. Consider this short list of his treacherous ideas:

~ A religious test for entering the country (unconstitutional)

~ Threatening to have the country default on debt obligations (madness)

~ Cozying up to Russia and Putin (dangerous)

Elect Trump and you get a potpourri of putrid. Trump is the personification of ignorance, bigotry, misogyny, mismanagement, confusion, and catastrophe. Ironically, that does make him a good republican. In fact, Donald Trump is very nearly the ideal representative of conservatism.

Most people do not watch news and commentary shows on a regular basis. I do, and therefore I’ve seen more of the Trumpenstein monster. Last week came the end of the entertainment value of this clown. The bloated orange face, the squirrel hair-do, the constant shouting, the spewing of made-up crap, the schoolyard taunts, the fascistic incitements to violence, the vomiting of unconstitutional positions, the bigotry, the misogyny, the lunacy — all of it was funny for the past ten months.

But not any longer. I don’t know why the humor evaporated. Perhaps because the race turned serious. Does anyone with a conscience want Trumpenstein to be the global representative of the United States? Does that oafish dungbag calling itself Trump stand for you? If it does, what does that say about America? What does it say about you?

Unparalleled in his right-wing nut-job douchebaggery, the hulking Trumpenstein monster is taking the con job of conservatism to new heights, widths, and depths.

The bottom line for every election is this: When you see an “R” after a candidate’s name, remember what it stands for: Racist, Regressive, Ridiculous, Repugnant. If you vote for a conservative candidate, those terms also apply to you.