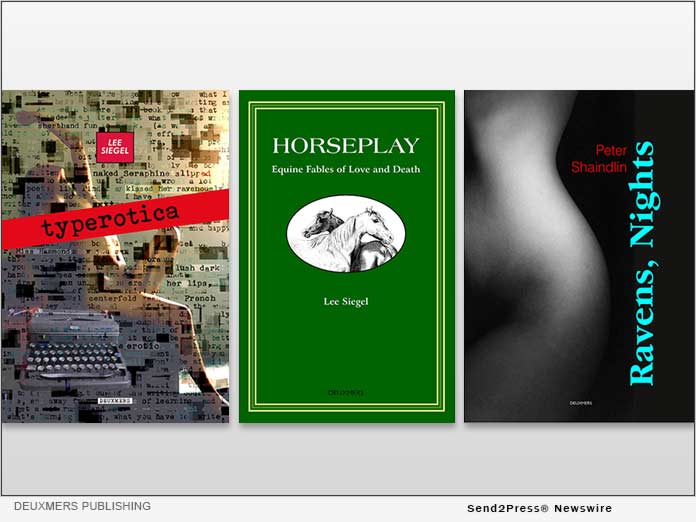 “Deuxmers is pleased to have widely published and acclaimed author Lee Siegel as one of its authors, which represents a consequential achievement in expansion of our portfolio,” said Omer Kursat, the managing editor of Deuxmers Publishing.

“Typerotica” (ISBN 978-1944521097) is a hilariously comedic and poignantly nostalgic portrait of an aspiring artist as a young man. Consisting of the typed manuscripts of two love stories, it illustrates an analogy: typing was once to literature what sex is to love. As a fifteen-year old, Lee Siegel is dazzled by a then contraband copy of Henry Miller’s “Tropic of Cancer,” and decides that he must become a writer. He imagines that in order to do that he needs to learn how to type and then go to Paris to drink French wine, smoke French cigarettes, and have sex with French women. “Typerotica” chronicles Siegel’s enrollment in a typing class, his subsequent amorous and literary adventures in Paris, and eventually his friendship with Henry Miller.

If we are to believe Lee Siegel, the author of “Horseplay” (ISBN 978-1944521103) is actually a horse, yes, a talking horse named Gulliver. According to Siegel, “Gulliver dictated the series of twelve stories that are sublimely romantic and yet bawdily down to earth, occasionally melancholy but fundamentally hilarious. Horseplay is indisputably one of the greatest books ever composed by a horse.”

Frank Stewart, in his review of “Ravens, Nights” stated, “Here is lyric poetry that testifies to the gratitude we must ultimately feel for being alive. Gratitude for forests, seas, stars, gardens, houses, cathedrals, bus stops, and trains-in spite of-and perhaps because of-the world’s brevity and ours.”

Lee Siegel, Emeritus Professor of Religion at the University of Hawaii, has published eight novels, four non-fiction books, and a translation of Sanskrit love poetry. Siegel’s writing has earned him a John Simon Guggenheim Memorial Foundation Fellowship, two Residency awards at the Rockefeller Foundation Bellagio Center, a Visiting Fellowship at All Souls College, Oxford, and the Elliot Cades Award for Literature. ( https://en.wikipedia.org/wiki/Lee_Siegel_(professor_and_novelist) )

Founded in 2011 in Waimanalo, Hawaii, Deuxmers Publishing is an independent publisher of fiction, poetry and photography books, with a mission of preserving individual voices and visions to be made available for future generations. Learn more at: http://www.deuxmers.com/.

This press release was issued on behalf of the news source, who is solely responsible for its accuracy, by Send2Press Newswire. To view the original story, visit: https://www.send2press.com/wire/deuxmers-releases-new-titles-by-peter-shaindlin-and-by-lee-siegel/