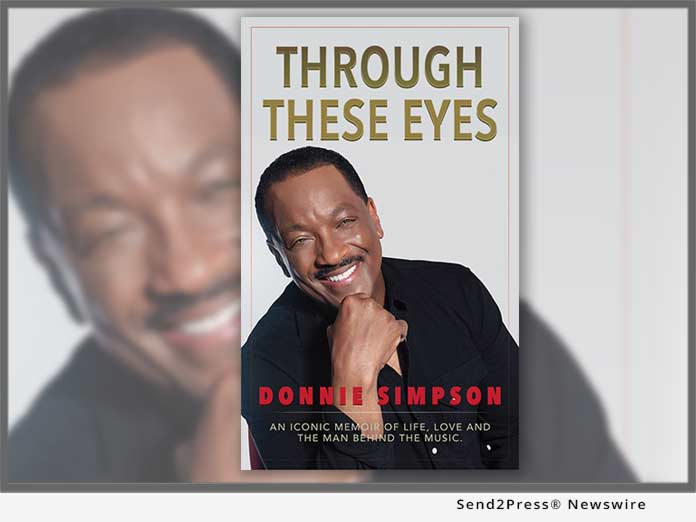 Through his highly anticipated memoir, Simpson chronicles the highs and lows of his extraordinary career which in 2019 will commemorate 50 years of entertaining listeners on Radio and Television.

“Through These Eyes” takes us back to where it all began, his beloved hometown of Detroit. Joining the staff at WJLB radio at 15 years old, affectionately dubbed, Donnie “The Love Bug” Simpson, quickly gained popularity with his sultry voice, warm smile, and piercing green eyes. Relocating after 15 years to Washington, D.C., he continued dominating ratings and captivating audiences, which led to his most memorable role in 1983 as the host of BET’s primetime music video show, Video Soul solidifying his role as a pop culture icon.

Over several decades, Donnie has interviewed the biggest stars in the world, including Stevie Wonder, Prince, Aretha Franklin, Whitney Houston, David Bowie, Janet Jackson, James Brown, Sting, Jay-Z, The Notorious B.I.G., Tupac, Madonna, Smokey Robinson, President Clinton, Tom Hanks, Barry White, and so many others. Donnie has been inducted into the BET Walk of Fame and the R&B Music Hall of Fame. The only non-musician honored at that point.

“I’m always labeled as trailblazer. To this day, so many artists talk about what it meant to sit on the couch with me, the effect that it had on their careers, and it’s a blessing to have been in that position,” says Simpson. “The most wonderful compliment I get is when people tell me they feel like they know me. They do know me; they know my spirit. I’m the same dude all the time. 24/7, always filled with hope and love, I’m Donnie. That’s my story.”

“Through These Eyes,” a publishing collaboration between Donnie Simpson Productions, The Oracle Group International, and 13th & Joan Publishing is available for pre-order at http://www.donniesimpson.com/.

This press release was issued on behalf of the news source, who is solely responsible for its accuracy, by Send2Press Newswire. To view the original story, visit: https://www.send2press.com/wire/legendary-tv-and-radio-host-donnie-simpson-celebrates-a-50-year-career-milestone-announcing-his-highly-anticipated-memoir/

UltFone Celebrates its One-Year Anniversary with Giveaways and Online Surprises