Evidence of disgusting Trump behavior surfaces every day and most of his supporters seem nonchalant about the data. Some go beyond ignorance by actually embracing Trump’s racism, misogyny, and xenophobia. Like Conservatism itself, Trump and his backers are anti-American and anti-humanity. 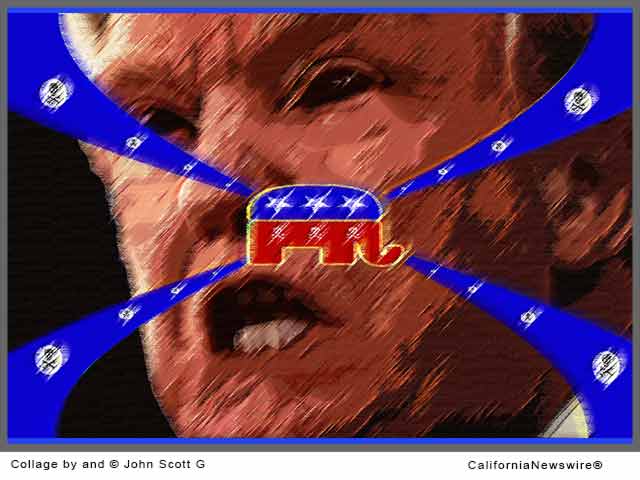 Stupid? Oh my yes, Trump voters are quite moronic. But all members of the GOP are dense — notice how Republicans are dumbstruck or angry when confronted by those pesky little things called facts. They continually retreat to the safe haven of the Fox Fake News network and such white power sites as NotBrightBart and World Nut Daily.

The syphilitic followers of Trumpenstein are a special brand of doofus. Not only are they ignorant of their candidate’s domestic and foreign policy lunacy, they appear to be unaware of any policies of any kind.

In other words, Trump supporters don’t even know what they don’t know. They just chant nonsense phrases like “Conservative values” while blindly following their fuhrer.

“The people can always be brought to the bidding of their leaders. All you have to do is tell them that they are in danger of being attacked and denounce the pacifists for lack of patriotism and exposing the country to danger.” – Hermann Goering, Third Reich’s Marshal of the Empire and Creator of the Gestapo

Out of the Mouths of Boobs

Reporters often interview people who are attending Trump’s klan rallies to find out what’s on their minds. And there’s nothing in there! The dimwits say that their beloved bloviating orange groundhog “tells it like it is” or some other euphemism for “I dunno what in tarnation any of this means but Trump’s mad as hell and I’m mad as hell and we’re gonna take our country back to when African-Americans and women knew their place” etc. etc.

“The best political weapon is the weapon of terror. Cruelty commands respect. Men may hate us. But, we don’t ask for their love; only for their fear.” – Heinrich Himmler, Third Reich’s Head of the SS

* Donald Trump is for and against nuclear proliferation. (Note to Republicans: that means more countries getting nuclear weapons.)

* Donald Trump is for and against raising taxes on the wealthy.

* Donald Trump is for and against privatizing Social Security. (Note to Republicans: that means taking the retirement funds of working Americans and letting them be managed by people like Bernie Madoff, Charles Ponzi, and Donald Trump.)

* Donald Trump is for and against increasing the minimum wage.

* Donald Trump is for and against defaulting on the debt. (Note to Republicans: defaulting on the national debt means interest rates would rise, the worth of the dollar would fall, and the U.S. would not be able to pay military personnel, retirees, and many other essential governmental operations.)

* Donald Trump is for and against the U.S. military using torture and committing war crimes.

* Donald Trump is for and against using ground forces in the Middle East. (Note to Republicans: the Middle East refers to nations overseas and not places like Pennsylvania.)

* Donald Trump is for and against allowing firearms in school classrooms. (Note to Republicans: a school is a place where normal families send their children to learn reading, writing, math, science, and social interaction.)

* Donald Trump is for and against making abortion illegal.

* Donald Trump is for and against putting LSD into the water supply. (Okay, I made up that one, but it doesn’t seem so farfetched in light of his other imbecility.)

Historian Richard M. Perloff wrote this about the leader of the Third Reich: “Hitler’s oratory moved people and appealed to their hopes and dreams. But his speeches malevolently twisted hope into some gnarled ghastly entities, and appealed to the latent, darkest prejudices of Germans.”

Look how easily those two sentences can be made to apply to our current political situation: “Trump’s oratory moves people and appeals to their hopes and dreams. But his speeches malevolently twist hope into some gnarled ghastly entities, and appeal to the latent, darkest prejudices of Americans.”

The decent people of the United States must come to a reckoning with the forces of the Party of Know-Nothing. There must be a push for Americans to become educated if we hope to deal with the pestilence called Conservatism.

Data from 1,229 Tastings Reveals Ethiopia as World’s No.1 Coffee Country