Based on recent events, it appears that the Conservative movement is an alternative reality that is fueled by greed and the need for multiple wives. In what universe is the loss of a billion dollars evidence of genius? 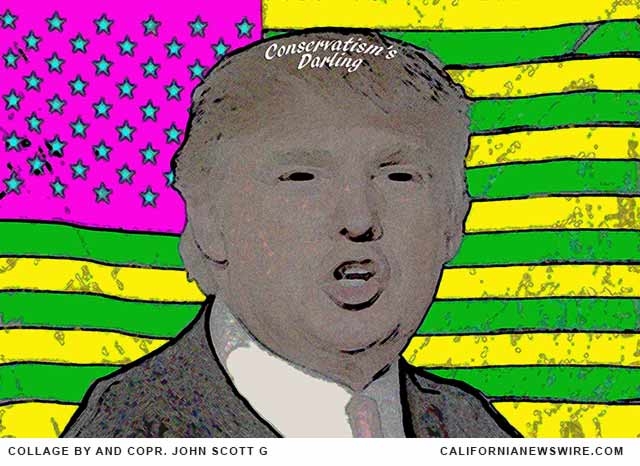 Donald Trump is a scavenger. When he sees an opportunity to profit at the expense of other people, he takes to it like white sheets on a Republican congressman. But he is doing so at the expense of the entire United States of America, which makes him anti-American.

Two Trump sycophants have gone on record supporting The Donald’s unpatriotic act. One was the GOP campaign’s screamer-in-chief, Rudy “Nosferatu” Giuliani, who used the term “economic genius” in describing Trump’s deplorable behavior. The grinning ghoul also went on to say that everyone commits infidelities — which is going to be shocking news to millions of married couples — and that Trump “is a lot better for the United States than a woman,” thus expanding the Republican war on women.

The other bloviating bovine was the GOP’s health-and-fitness guru, Chris “Roadblock” Christie. He proved his ability to stick to Republican talking points by also using the word “genius” to describe the duplicity of The Donald.

The Genius of George Armstrong Custer

“We will ride to face the Indians at Little Big Horn, surround them, and enjoy a huge victory through the brilliance of my tactics. This war will be short, we will be hailed as liberators, and the war will pay for itself. Genius!”

The Genius behind the Design of the Hindenburg

“We will construct a massive balloon filled with highly flammable gas and use it to transport passengers in luxury. As an example of right-wing genius, this will be one of the most–” The rest of the sentence was cut off by the sound of an enormous explosion.

Let’s not stop with Donald Trump’s shrewdness in causing harm to America. Or the masterstroke of the GOP using trickle-down economics to boost billionaires at the expense of the middle-class. Or the cleverness of Republican voter suppression. Or the master planning of Conservative racism.

Grand and glorious as those concepts are, I feel we should go further and consider these equally cunning plans and ideas:

* Popular car design from the Edsel to the DeLorean

* Hull design innovations on the Titanic

* The people-pleasing policies of Vlad the Impaler