This bedtime story is a fable about the rise and fall of a modern-day tyrant named Ronald Dumpt. 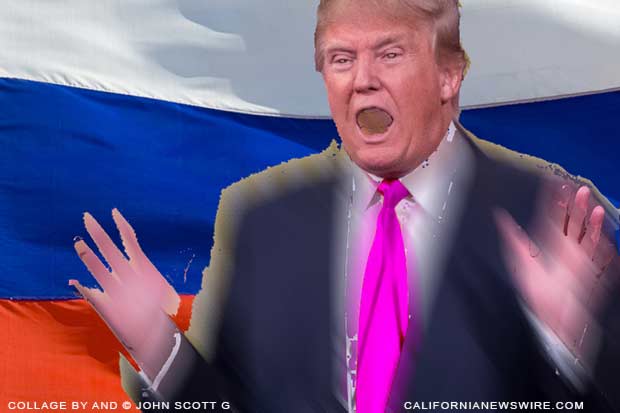 Once upon a time there was a country that tried an experiment called democracy. The country was called Usa (pronounced “OOsah”) and it had a population of 320,000,000. The majority of the Usa citizens enjoyed access to food and shelter, thus making its citizens rich by comparison to most people in the rest of the world.

Usa was a Democratic-Socialist nation, but one of its two major political parties — the Congops — used the liberty inherent in the first half of that term to distort the meaning of the second half of that term.

That same political party continually worked to destroy the ability of its own government to provide essential services such as roads, bridges, electricity, clean water, education, health and human services, and so forth. “Freedom,” they called it, although what the Congops did was actually “obstruction,” “malfeasance,” and “treason.”

In addition to the Congop attacks on Usa from inside its borders there were also many attacks from outside. Autocratic leaders around the world derided Usa’s experiment in democracy. “That will never last,” they predicted. “That will be inefficient,” they said. “That must be destroyed,” they vowed, and then they worked diligently and surreptitiously to bring about that destruction, sometimes aided by Congop politicians and sympathizers.

The horrible actions of Usa’s treasonous Congop party divided the nation, paving the way for the rise of a demagogue. One terrible day, there came upon the land of Usa a rude, crude, corpulent, and cacophonous figure who captured the imagination of the ignorant, the racist, and the greedy — the natural constituency of the Congop party. The name of this evil man was Ronald Dumpt. He was a typical capitalist in that he cared nothing for humanity and was concerned only with the bottom line. Not even the bottom line of his many business ventures, just his own bottom line. For example:

* If a real estate project failed, Dumpt still made money and was protected from losses on the deal.

* If a retail product line failed, Dumpt still made money and was protected from losses on the deal.

* If a service industry business failed, Dumpt still made money and was protected from losses on the deal.

In fact, Ronald Dumpt always made certain that he, personally, profited whether or not the business was successful for his investors. This is why Dumpt said such strange things to corporations and other countries — for him, any deal that made money for Dumpt was a good deal even if it harmed America.

Steps Leading to the Abyss

Dumpt shocked the world by getting elected president of Usa through a combination of circumstances:

First: Dumpt made wild promises to stupid people (“You’ll have better healthcare for less money,” “You’ll get better jobs,” “You’ll all be rich,” and “You’ll be able to openly express your hatred of XXXgers, XXics, and moose-lambs”).

Second: Dumpt made back-room deals with Wall Street so they could once again financially rape the country.

Third: Dumpt had his people collude with a foreign dictatorship to disrupt the Usa electoral process to aid his victory.

Fourth: Dumpt assured everyone that he would bring “the best people” to Washington.

Usa’s calamities were catastrophic for many Congop voters — often called goobers — who were bamboozled into voting for Dumpt and his minions. Consider:

* Instead of “the best people,” Dumpt seeded his administration with corrupt bankers, racists, war-mongers, fellow greedgoons, and family members who were all conspiring to mismanage everything. Who got hurt by this? Americans. And which Americans got hurt the most? Dumpt voters.

* Dumpt’s policy of allowing the financial community to commit Dumpt-style con games and fleecing schemes resulted in tens of thousands of goobers losing their homes and mobile homes.

* Dumpt’s policy of allowing companies to engage in pollution resulted in goober sons, daughters, and grandparents getting sick and dying, always painfully and often slowly.

* Drumpt’s policy of removing consumer protections resulted in thousands of goober families being bilked and swindled out of their life savings.

* Dumpt’s policy of giving tax breaks to manufacturing firms resulted in the construction of many more plants and factories — but no jobs for goobers because everything was now being built by robots.

* Dumpt’s protectionist policies resulted in massive imbalance of trade which raised prices for all Usa citizens.

* Dumpt’s religiosity policies resulted in several regional wars with moose-lamb countries, leading to the death and dismemberment of thousands of goober sons and daughters.

Eventually, the Dumpt administration was overthrown and a fundamentally decent person from a sane political party took over the leadership of Usa. This put the country back on track but it did not stem the tide of goober gun squads seeking to assassinate Dangerous Dumpt and his corrupt offspring, Junior Ronald, Ereich, and Marie Antoinette.

“Dumpt and his whole Dumpster fire family killed my nana,” said one goober resident of a moron-majority state, “and now he’s a-gonna pay!” The same type of statement was made in all of the states and districts. Calls to “Delete Dumpt” were heard daily.

Journalists from “the failing New York Times” reached out to the Dumpts for comment and their spokesperson, Kellyanne Methlab-Barbie, said that the entire brood and their remaining trusted advisors (both of them) were living in an underground bunker near the Vader family compound in Wyoming.