Many Americans seem unaware of the actual stakes in the 2016 election — the Greedy Obstructionist Party is promising trade embargoes, Radical Christian Terrorism, increased war on women, and actual shooting wars. All in all, the ascendancy of Conservatism is a sharp and current threat to us all. 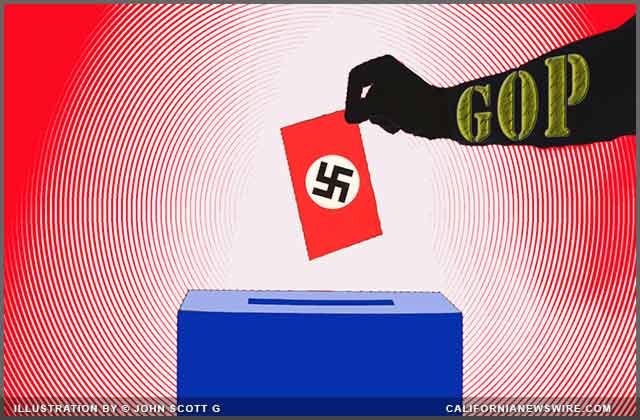 For perspective, we turn to Professor Austin O. Arthur, a noted author and lecturer.

“The media stresses trivialities like Donald Trump’s racism, misogyny, and sexual assaults,” Professor Arthur states, “when our attention should be on the dangerous policies of Conservatives and their Republican Party.”

“Well,” the Professor said. “Trump said he is fine with the U.S. using nuclear weapons. That, in and of itself, disqualifies him to be president.”

“And Trump has encouraged other nations to acquire nuclear weapons. That is also disqualifying.”

“Then there’s the matter of Trump’s financial ties to Russia. Disqualifying.”

“Yes,” I said, starting to get overwhelmed by it all.

“That is a big problem, especially for a Party that keeps shouting about the Constitution.”

“Yes, it’s ironic,” the Professor said. “But let’s not forget that Trump thinks our armed forces should commit war crimes — including carpet bombing, attacking the families of combatants, torturing prisoners — and each one of these positions is disqualifying.”

“Trump is the GOP nominee,” Professor Arthur said, “and they own those positions.”

“Some Republicans don’t seem too happy about it,” I pointed out.

“Aren’t they for anything?”

“They are in favor of the Alt-Right.”

“White Supremacists, neo-Nazis, worshipers of the policies of the Third Reich — that sort of thing. That’s why Trump is endorsed by the Ku Klux Klan.”

“Trump is endorsed by the KKK?” I asked.

“Front page of their newspaper. And their headline was ‘Make America Great Again.’ Very disturbing.”

“Wow, that’s horrifying,” I said. “How do GOP officials handle all that?”

“They use prevarication, duplicity, pretense, and denial,” the Professor stated.

“Does that fool their voters?”

“Quite often. You know, GOP hypocrisy is stunning,” Professor Arthur continued. “For example, they whine and moan about Hillary Clinton deleting her personal emails before turning over work-related emails, but they were silent about the George W. Bush administration deleting twenty-two million emails.”

“I had forgotten about that,” I said.

“Not to mention Trump’s failure to provide his tax returns,” the Professor continued. “Can you imagine the howl of protest if Hillary had done that?”

“It wouldn’t be pretty,” I admitted.

“But that’s not all,” the Professor said. “The election coverage also has failed to focus in on other GOP policies that are harmful to the nation.”

“That sounds ominous,” I said.

“Consider this,” the Professor went on, “the GOP is conducting a campaign to suppress the vote. That disqualifies their party, in my view.”

“Conservatives continually prevent Americans from receiving the same type of universal health care enjoyed by all other developed countries. I think this is also disqualifying,” the Professor said. “What’s so weird is that America has a health care plan that works. It’s called Medicare and it’s quite good. The only problem is that it is limited to those over sixty-five.”

“Why doesn’t Congress simply expand it and give us Medicare For All?”

“Because Conservatives get campaign donations from the insurance companies and pharmaceutical firms that profit from sick people.”

“That seems wrong,” I said.

“Yes, it is,” the Professor stated. “In addition, Conservatives continually call for the removal of regulations protecting air and water. GOP actions have already poisoned one hundred thousand people in Michigan. Who knows what neighborhoods are next? GOP actions in this regard disqualify all of their candidates.”

“Absolutely, but wait, there’s more. The GOP doesn’t want to do anything to help fight climate change — only the most important issue facing humanity today. This is also totally disqualifying for the entire Republican Party.”

“It sure is. What about the economy?” I asked.

“The sad fact is that GOP candidates continually support the financial raping of the poor and the middle class in order to increase the wealth of those who are already wealthy. That’s bad economics and bad civics.”

“The GOP is downright scary.”

“If you vote for a Republican, you are supporting anti-American policies.”

“It sure seems that way,” I said. “Well, thank you, Professor. Oh, I almost forgot to ask this: how are you voting this year?”

“I voted for Birgitta Jonsdottir.”

“Wait, isn’t she the head of The Pirate Party in Iceland?”

“How does that work?”

“Once I got a look at Trump and his ilk, I renounced my citizenship and am moving to Reykjavik so I can support a free and open Internet.”

“I guess I can see that. Trump is quite disgusting.”

Professor nodded and said, “As are Mike Pence, Ted Cruz, and Paul Ryan, the so-called ‘intellectual head of the Conservative movement’.”

“Sure, I can see how lowlifes like that would–”

“Right, those are disturbing people who–”

“Well,” the Professor said, “let’s just say there are tons of right-wing nut-job schmucks who are trying to destroy America with their embrace of fascism.”

“You know,” the Professor replied, “you just have to look at that murderer’s row called the GOP and even the winter of Iceland seems welcoming.”