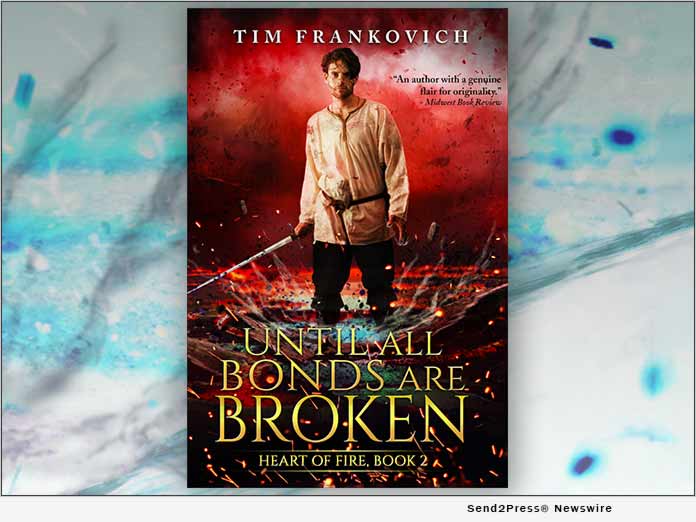 LEAGUE CITY, Texas, Apr 29, 2020 (SEND2PRESS NEWSWIRE) — COVID-19 is keeping everyone at home and many people out of work. When Tim Frankovich’s freelance work dried up, he turned to writing instead. Today, he announced publication of his second novel, “Until All Bonds Are Broken” (ISBN: 978-1733328524).

“I published my first novel last August, and had planned to release the second one a year later,” Tim explained. “With all this extra time, I sped up the process. It’s ready now!”

Growing up in Galveston County, Tim Frankovich was always interested in writing. At age 8 in Texas City, his mother showed him how to cut up a brown grocery sack to make a “book.” He quickly drew a story of Godzilla fighting superheroes. Since then, he’s gotten a little bit better at the writing part (not so much with the drawing).

Not long after that, Tim borrowed “The Lord Of The Rings” from the Texas City library and his lifelong love of epic fantasy took off. Today, he is proud that his own epic fantasy novels are being published.

“Until All Bonds Are Broken” is Tim’s second book, the sequel to his debut novel, “Until All Curses Are Lifted” (ISBN: 978-1733328500). Set in the fantasy realm of Antises, the books tell the story of Marshal, a young man seeking to escape a curse he received for his father’s crimes, and Seri, a young woman who is trying to find the cause of the land’s failing magic. The books feature adventure, monsters, a lost king, walkers between worlds, a leper assassin, and a rusty old flail.

“Until All Bonds Are Broken” is available in ebook and paperback at amazon.com and wherever good books are sold! Paperback: $14.99. Ebook: $5.99.

This press release was issued on behalf of the news source, who is solely responsible for its accuracy, by Send2Press Newswire. To view the original story, visit: https://www.send2press.com/wire/local-texas-author-uses-quarantine-to-finish-novel-early/