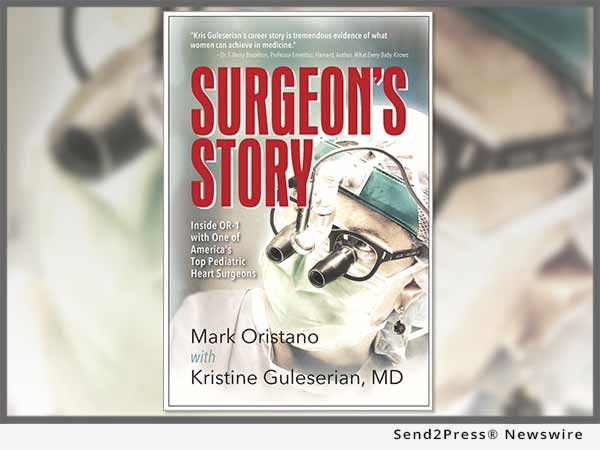 DALLAS, Texas, Aug 24, 2017 (SEND2PRESS NEWSWIRE) — As kids across the country get ready to go back to school, Dr. Kristine Guleserian, one of the nation’s most accomplished pediatric heart surgeons, thinks back on her early school days very fondly. Guleserian is the co-author, with Mark Oristano, of “Surgeon’s Story: Inside OR-1 with One of America’s Top Pediatric Heart Surgeons” (ISBN: 978-1935953777).

Dr. G, as she’s known to one and all, attended the Winsor School in Boston, and she credits the education she got there with starting her down the road to her current status as one of the country’s top children’s heart surgeons. In “Surgeon’s Story,” Dr. Guleserian described the teacher who opened up her world.

“One day the Greek teacher, Mrs. Dorothy Souvaine, wrote out the entire Greek alphabet and a few simple Greek words. The first word she wrote down was ‘Bios,’ meaning life. And then she wrote ‘Logos,’ meaning study of. ‘Bioslogos.’ So, biology – the study of life. I was fascinated. If I studied and became proficient in Greek, I could dissect out every word and understand its true meaning, I figured I’d have the fundamentals to understand anything.”

“When I told my father that I was going to make Classics my concentration at Harvard he said, ‘What are you gonna do with a degree in Greek? Go back and teach at the Winsor School?’ When I went back to Boston for my 30th Winsor School reunion I found out they don’t offer Greek anymore. They teach Chinese now.”

Dr. G had another significant chance to visit Winsor in 2011, to lecture to the young girls sitting where she sat years before.

“I went back to the Winsor School in 2011 to give the annual Virginia Wing lecture. Miss Wing was the headmistress of the Winsor School when I was there. When I was a student at the Winsor School Dr. Tenley Albright, a gold medal Olympic figure skater who became a general surgeon, spoke to the student body in the very same assembly room I was in now. Dr. Albright’s speech made a huge impression on me. I thought, ‘Wow, a woman can be a surgeon!’ And now I, a woman and a surgeon, was speaking to the student body. I can go to a surgical conference and they’ll all listen to what I have to say. But in room full of students, I feel like everybody’s listening, and the impact I can make there is huge.”

Dr. Guleserian was the Surgical Director of Pediatric Cardiac Transplantation at Children’s Medical Center in Dallas from 2007 to 2017. She is now on staff at Nicklaus Children’s Hospital in Miami, where she is starting up a cardiac transplant program.

For more information on “Surgeon’s Story: Inside OR-1 With One of America’s Top Pediatric Heart Surgeons” visit http://surgeonsstory.com/.

About Author Mark Oristano:
Mark Oristano is an author/journalist in Dallas, Texas. He spent a 30-year broadcasting career calling NFL football games for the Houston Oilers and Dallas Cowboys. He is a longtime volunteer at Children’s Medical Center, Dallas, where he spent five years shadowing Dr. Kristine Guleserian for his new book, “Surgeon’s Story.”

This press release was issued on behalf of the news source, who is solely responsible for its accuracy, by Send2Press Newswire. To view the original story, visit: https://www.send2press.com/wire/in-new-book-renowned-pediatric-heart-surgeon-credits-her-all-girl-school-education-for-her-success/