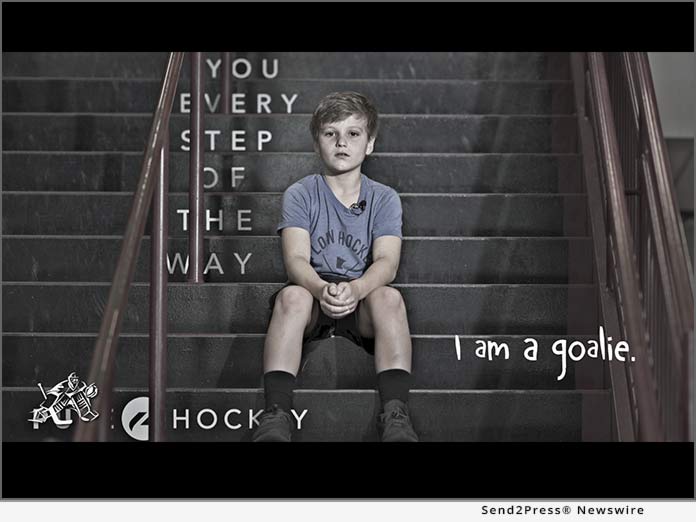 BLAINE, Minn., Nov 09, 2021 (SEND2PRESS NEWSWIRE) — MEGA Goaltending, a company committed to teaching players and coaches the proper goaltending skills and fundamentals, has launched an emotional video ad with a plea from kids talking directly to their coaches. The campaign’s goal is to make sure youth hockey associations are properly trained when it comes to coaching their young goalies.

The video features kids talking to the camera asking their coaches to “notice them.” The ad depicts that if their coaches pay attention to them; they will like themselves more, have more self-confidence, be more likely to go to college, and learn what it means to be strong. None of the kids in the video are actors. They are all just normal kids who play hockey.

The campaign was the brainchild of Justin Johnson, owner and founder of MEGA Goaltending, and was shot, directed, and produced by Sam Scaman of pixelworld.tv. “Too many times, on too many teams, youth hockey association coaches don’t know what to do during practice with their goalies,” says Johnson who is also the Minnesota Gophers goaltending coach. “We want to make sure these kids in the net are in a position to succeed and feel good about themselves, and that begins with coaching the coaches.”

See the full video here: “I am a Goalie, I am a Kid” – https://www.megagoaltending.com/products/mite-development-program/

Too many associations take the ‘cross our fingers and hope method’ to recruiting and developing beginner goaltenders. They simply hope by sheer numbers that enough kids will want to be a goalie while not providing them with the support or development required to keep them engaged.

For the past 11 years MEGA Goaltending has worked with a variety of hockey associations on how to build their Mite goaltending programs. This has resulted in the Mite Goalie Development Program now available for coaches and associations across the country.

The Mite Development Program is the culmination of MEGA Goaltending’s experience in setting up the foundation and long-term plan for mite goalies. According to Johnson, “we set a process in how to attract kids to the position and then how to pay attention to them and their development. The result are more goalies and more kids enjoying the position.”

MEGA programs have been designed to develop and refine a goaltender’s skills in a challenging and purposeful environment. The dynamic coaching staff includes multiple collegiate goalie coaches. Each of them brings a unique blend of coaching and playing experience ensuring every student receives a quality training experience.

When participating in MEGA programs you can expect to learn not only the most current methods of goaltending but also give you the time and repetitions to discover which methods work best for you. In addition, MEGA coaches are passionate about developing the type of mental skills that will not only serve you well in the crease, but later in life as well.

For more information on MEGA Goaltending, you can go to their website at https://www.megagoaltending.com/.

Johnson is the founder of MEGA Goaltending — a Midwest based goalie training and resource company that works with goalies, coaches and associations of all sizes and skill levels. Johnson is also owner of Minnesota-based training and guidance companies FHIT Hockey and its prestigious programs, MAP Hockey and hybrid learning school TPH in Plymouth, MN. He has published two interactive books, a customized preparation manual for goalies titled “GameDay,” and an eBook titled “The Fundamentals of Goaltending.” In addition to these works, in 2012 Johnson released the world’s first goalie training App titled Read and React, which challenges goalies to anticipate a player’s shot placement at various speeds.

Johnson also brought plenty of college hockey experience as both a player and a coach to the Minnesota Gophers hockey team as the Men’s goaltending coach for 8 seasons. He was a four-year letterwinner for the Gophers hockey team from 2001-05. Johnson posted a 2.88 goals-against average and 22-8-3 career record during his four seasons with the Gophers. He was named to the all-tournament team at the 2003 Western Collegiate Hockey Association Final Five after stopping 50 of 54 shots, including a career-best 36 saves in the title game victory against Colorado College. Johnson played for the Gophers’ consecutive NCAA National Championship teams, including a regional championship game victory against Ferris State as a sophomore on the way to the 2003 title. He was a three-time recipient of the team’s community service award.

Johnson played his prep hockey at Blaine High School where he was a two-time all-conference selection and earned honorable mention all-state accolades as a senior. Johnson helped the Bengals to the state tournament consolation game in 1999. He played one year in the USHL with the Lincoln Stars.

Following his collegiate career, Johnson graduated from Minnesota in 2005 with a major in psychology. In addition to his coaching duties, Johnson serves as USA Hockey’s Minnesota District Associate Goalie Coach-in-Chief.

Johnson resides in Brooklyn Park with his wife Ashley and their three children, Payton (11) Zoey (8) and Jack (6).

This press release was issued on behalf of the news source, who is solely responsible for its accuracy, by Send2Press Newswire. To view the original story, visit: https://www.send2press.com/wire/emotional-video-campaign-targeting-youth-hockey-associations-stresses-the-importance-of-coaching-their-young-goalies/

Social Media Campaign Promotes the Importance of Grasslands in the Americas