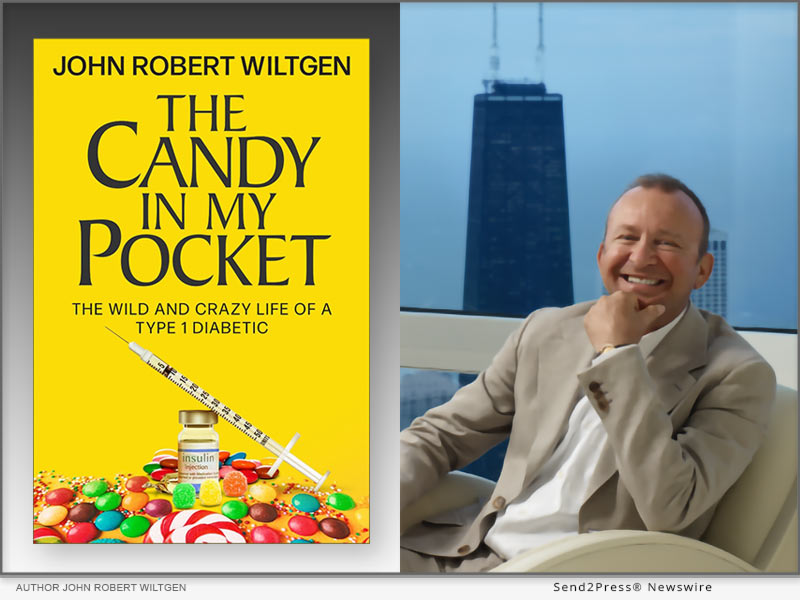 CHICAGO, Ill., Dec 02, 2022 (SEND2PRESS NEWSWIRE) — With holiday shopping just around the corner, John Robert Wiltgen’s riveting memoir “The Candy in My Pocket” (ISBN: 979-8986007007), is now available for the gift giving season. As a type 1 diabetic for more than 55 years, Wiltgen has been a successful business owner and now author whose memoir describes his journey of finding joy and success amidst a life riddled with obstacles and despair due to insulin-dependent diabetes.

Critics describe “The Candy in My Pocket” as an inspirational but irreverent story about designing your best life despite horrifying circumstances.

His memoir journals the dramatic days of his forty years as an award-winning designer commissioned by celebrities, world leaders, and other luminaries; his (secret) debilitating and death-defying battle with diabetes; and the struggle to hold on to himself and those he cared about along the way.

“I first knew I was going to live an extraordinary life when Zsa Zsa Gabor said I should be on stage,” said Wiltgen.

But then Sid Caesar told him, “If you don’t have tragedy, you won’t have comedy.”

The years have taught Wiltgen they were both right.

Wiltgen was diagnosed with T1D when he was eight. At that time, his parents were told he would not live to see 40. For a kid from a middle-class suburb of Chicago his life has been exceptional.

When he was 16, he apprenticed at a theatre working with Hollywood legends such as Zsa Zsa and Eva Gabor, Louis Jordan, Leslie Caron, Syd Caesar, and Imogene Coca.

Wiltgen started his own residential design firm at 18 and never looked back-even when he could not see. “After all, who wants to hire a blind designer?” he laughs.

Wiltgen fought diabetic retinopathy in his early 20’s for four years and won. A year later he was told he needed a kidney transplant. Performed at the University of Minnesota, it is now 36 years post-surgery and still functioning! “The surgeons told me it would last 12-15 years but they were mistaken,” said Wiltgen.

In his 30’s he developed heart disease, fought cellulitis, osteomyelitis, a below the knee amputation, pulmonary fibrosis and skin cancer.

Wiltgen also survived COVID in April of 2020 when no one knew anything about it. “The doctors would not come into my room. Instead, they phoned me on the hospital’s phone to find out how I was doing,” he said.

Nonetheless, his memoir includes larger-than life tales that are extremely entertaining. Though his life involves many tragedies, it also includes exciting personal and professional adventures as well as celebrity cameos with stars such as Jane Seymour, Timothy Hutton, Angelina Jolie, Sean and Robyn Wright Penn, Steve Harvey, John Cusack, the former Governor and First Lady of Lagos State, Nigeria (who is now running for President of that country) and Jesus.

His career has included designing homes across the United States, Canada, Mexico-even Africa. Wiltgen has appeared on HGTV, NBC, FOX, WTTW etc. His completed projects have been featured in more than 200 newspapers and magazines not including the hardcover coffee table books that also display his work. He has received 45 awards from his peers.

Navid Ziran, an orthopedic trauma surgeon said, “I perform many amputations due to diabetic foot infections and am very familiar with the effects of diabetes on the mental and physical quality of life as well as the overall longevity.”

“The five-year mortality rate after an amputation is 62%,” Ziran noted. Other individuals would have died a long time ago, yet he not only survived but became a world-renown designer,” said Ziran.

“John is a quintessential example of how the human spirit can not only adapt but also flourish and succeed despite overwhelming obstacles. Truly, his life story embraces “ad astra per aspera”-a crooked path leads to the stars,” said Ziran.

“I would say that regarding survivability and inner strength, John represents the end of the bell curve for not only diabetic patients but also humans,” he concluded.

Holly Hunt, founder of the celebrated luxury home furnishings and design brand said, “John has a talent for storytelling and writing as well as for design, but the most important part of this memoir is his amazing energy and determination to live with the debilitating disease type 1 diabetes, Hunt said. “He enjoys a full life gathering fabulous, famous and adventurous friends, and gives back to many far more than he takes. He never looks back, always forward choosing to be happy and fully engaged while hiding his scars and physically damaged parts with Versace!”

Cynthia Rowley, global fashion designer, remarked, “I laughed out loud at every story. John’s triumph over medical adversity is enormously uplifting. He chooses joy, happiness and unwavering positivity in his quest to live life on his own terms. I have never met a person with more energy and pathological optimism.”

“I wrote this book to help people of all beliefs and backgrounds remain optimistic in the worst of times-no matter what personal or professional challenges they’re dealing with,” stated Wiltgen. “You might not have diabetes or know someone who does, but we all have challenges-and need stories exemplifying how to live our best lives-or, at least, laugh while trying!”

“The Candy in My Pocket” would make a great holiday gift not only for any one of the 500,000,000 diabetics around the globe, but for anyone fighting a debilitating disease. It can be purchased online through Amazon, Barnes and Noble, the Book Depository, even Walmart.

For more information, please go to the following websites:

A portion of the profits realized from the sale of this book will be donated to the Juvenile Diabetes Research Foundation.

John Robert Wiltgen has spoken on numerous topics at various venues including colleges, trade shows, private clubs, professional organizations and numerous podcasts. He’s appeared on HGTV’s I Want That! Baths; I Want That! Kitchens; and Homes Across America as well as NBC’s Open House, Fox Television, and WTTW. He is a great interview.

John Robert Wiltgen started writing as soon as his mother bought him a used Underwood typewriter at a garage sale. During middle school he was editor of the school newspaper. He graduated high school in 3 years studying art, literature, creative writing and theater. After a brief stint at design school, he embarked on his career as a residential designer and never looked back.

Wiltgen continued to grow his award-winning and successful residential design firm while fighting many obstacles. He obsessed over making his client’s worlds beautiful taking him across North America and halfway around the world-from Chicago’s Gold Coast to Africa’s Ivory Coast. John Robert Wiltgen Design is synonymous with its reputation for excellence and superior quality in design, styling, and craftsmanship.

“The Candy in My Pocket” is Wiltgen’s first book-a very personal memoir. However, he promises to delve into writing fiction next.

About his life John likes to quote the American writer, Elbert Hubbard. Born in 1857, raised in Illinois, he wrote, “Do not take life too seriously. You will never get out alive.”

This press release was issued on behalf of the news source, who is solely responsible for its accuracy, by Send2Press Newswire. To view the original story, visit: https://www.send2press.com/wire/designer-john-robert-wiltgen-beats-the-odds-the-candy-in-my-pocket-an-inspirational-memoir-about-designing-your-best-life/