LOS ANGELES, Calif. /California Newswire/ — The Valley Relics Museum of Van Nuys, California, has acquired a collection of 3,000 advertising characters once housed in the galleries of the Museum of Modern Mythology in San Francisco, founder Tommy Gelinas announced today.

The unique collection, featuring display versions of the Jolly Green Giant, Mr. Clean, Elsie the Cow, Tony the Tiger, Cap’n Crunch and Mr. Peanut, promoted the idea that such figures were modern manifestations of mythic archetypes. The Museum of Modern Mythology operated in downtown San Francisco from 1982 through 1989, focusing on the curation and display of twentieth century advertising artifacts. The entire collection was moved to storage in 1989 after the gallery’s closure in the wake of the Loma Prieta earthquake. 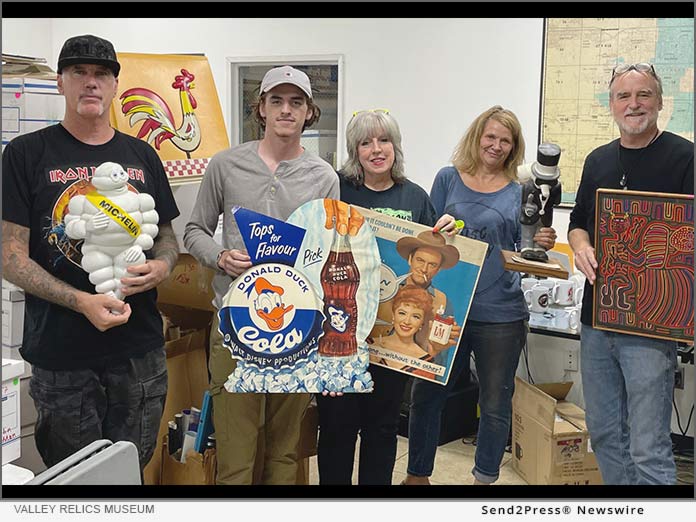 “Every culture has its own mythology,” Ellen Havre Weis, the Museum’s founding director, was quoted as saying. “Regardless of where they came from, these images exist, they’re part of our culture and they must be dealt with in some serious light.” Ms. Weis passed away earlier this year from cancer. Gordon Whiting and Benjamin Whiting, Ms. Weis’s husband and son, negotiated the agreement to move the collection to its new home at the Valley Relics Museum in the months before she died.

Such luminaries as film historian Leonard Maltin and mythologist Joseph Campbell joined the board of the Museum of Modern Mythology, validating the significance of the collection and its underlying thesis.

The Valley Relics Museum is home to a pop culture pantheon of neon signs, pinball and video arcades, life-size Jack in the Box clowns, and television artifacts from the home of “Dragnet” star Jack Webb, among other memorabilia from post-war California culture.

“We see this as a natural extension of our mission, to preserve and make available the many expressions of popular culture that surround us and become part of our lives,” said Mr. Gelinas, who founded Valley Relics in Chatsworth, California, in 2013. He relocated the gallery to its present location near the Van Nuys airport in 2018.

“The idea that these figures have some deeper resonance seemed obvious to us. We’re thrilled to carry on the work that Ellen started, and to share these colorful and beloved characters with the public.”

Mr. Gelinas estimates the first exhibit of the new collection will launch early next year. “The Museum of Modern Mythology will open at the Valley Relics Museum in Spring 2022, in a new gallery annex adjacent to the main rooms.”

Highlighting New Acquisitions on View at the Museum of Sex, NYC