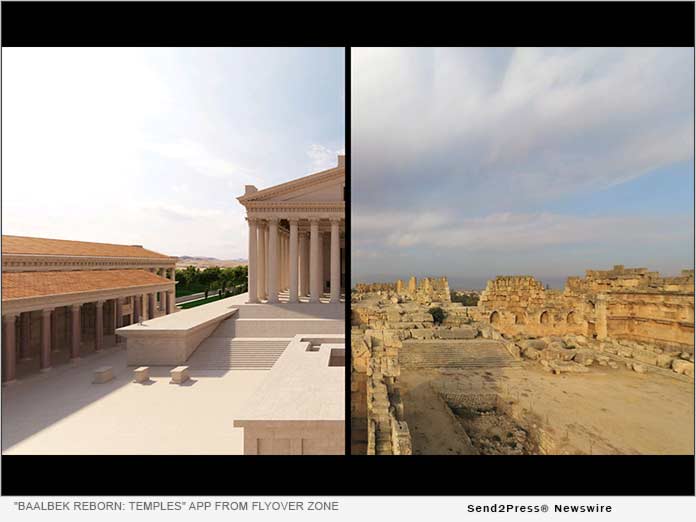 BLOOMINGTON, Ind., Mar 31, 2021 (SEND2PRESS NEWSWIRE) — The famous temple complex of Baalbek, the ancient Heliopolis in Lebanon, is one of the largest Roman religious sites in the world and part of the world heritage. Baalbek has a rich history that goes back to around 8,000 BC. The remaining six pillars of the Temple of Jupiter are now a landmark of Lebanon. On March 31, the “Baalbek Reborn: Temples” app from Flyover Zone will launch using the latest technology to reconstruct what today’s ruins looked like in the past. On a journey through time, the virtual tour brings this heritage back to life and shows the Temple of Jupiter Heliopolitanus, the Temple of Bacchus, the Temple of Venus and the Temple of the Muses.

This extraordinary experience is the result of a collaboration between the Lebanese General Department of Antiquities (DGA), the German Archaeological Institute (DAI) and Flyover Zone, a US-based company that specializes in virtual time travel to cultural heritage sites. Experts from the DAI who have been working on the site since 1998 provided the scientific basis for the 3D reconstructions. By using the latest technology, Flyover Zone succeeded in creating an impressive experience taking users on a journey into the past.

“What’s fascinating about Baalbek is not only the Roman temples, but also its almost 10,000-year history,” stresses Margarete van Ess, director of the Orient Department of the German Archaeological Institute and longstanding head of scientific research in Baalbek. “As an archaeologist, finds and research results give me images in my mind of what this special place looked like at that time. It’s fantastic that the temples are now given shape in the app and can be viewed by people all over the world!” says van Ess.

The depth and relevance of the scientific knowledge conveyed via the app makes Baalbek Reborn: Temples unique. Users can choose to move either virtually through today’s excavation site or through the digital reconstruction of the ancient religious sites. The audio track, optionally in Arabic, French, English or German, provides scientifically sound knowledge and explanations. There are 38 stops distributed across the temple complexes, presented by the researchers of the DAI. This makes the app equally interesting for laypeople and experts.

Bernard Frischer, founder and president of Flyover Zone stated: “For Flyover Zone, this project has been a dream come true. In addition to the sheer size of the Baalbek sanctuary, its cultural significance cannot be exaggerated. In antiquity, people from distant points of the empire consulted the oracle of Baalbek, and we even have records of emperors doing so, too. Now we are using what we learned to bring Baalbek into the classrooms and living rooms of students and the general public. We hope that thousands of people around the world will download the virtual tour and use it to whet their appetite to visit the site when the COVID-19 pandemic passes and international travel is possible again.”

“The Baalbek Reborn: Temples” virtual tour is provided free of charge thanks to the generosity of Bassam Alghanim who donated the funds in loving memory of his parents, Yusuf and Ilham Alghanim. The DAI and Flyover Zone thus contribute to promoting a deeper understanding of the importance of the ancient temples, making scientific knowledge more widely accessible and promoting Baalbek as an important tourist site.

ABOUT THE GERMAN ARCHAEOLOGICAL INSTITUTE:

The German Archaeological Institute (DAI) is one of the world’s leading research institutions in the field of archaeological sciences and ancient studies. Founded in 1829, the German Archaeological Institute has its head office in Berlin and is a federal agency operating within the remit of the Foreign Office. Including the head office, the institute has six major facilities in Germany and is globally active, with five departments abroad. The DAI carries out archaeological research on over 300 projects around the world. Among its other tasks are the preservation of cultural assets through site management and heritage management as well as maintaining cultural identity in host and partner countries.

Flyover Zone is an employee-owned company based in Bloomington, Indiana (USA). It has staff in seven countries on three continents. The company’s special strength is the creation of virtual tours that take users on trips that combine time travel with travel through space. Since its founding, the company has published virtual tours of ancient Rome and Hadrian’s Villa, the World Heritage Site located in Tivoli, Italy. Work is underway to release new virtual tours in 2021 – presenting sites in ancient Athens, Egypt, and Mexico.

This press release was issued on behalf of the news source, who is solely responsible for its accuracy, by Send2Press Newswire. To view the original story, visit: https://www.send2press.com/wire/travel-back-in-time-on-a-virtual-3d-tour-to-the-famed-roman-temples-of-baalbek/

Classic Easyriders is back in time for the Holidays: Get a Limited Edition David Mann Ghostrider Tapestry