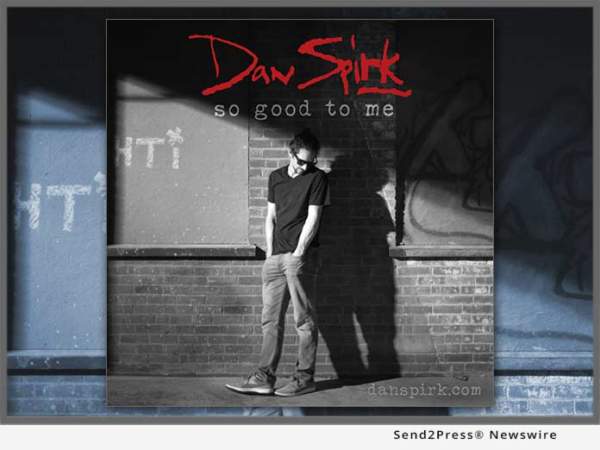 NEW YORK, N.Y., Nov 28, 2017 (SEND2PRESS NEWSWIRE) — Harlem based Rock, Pop singer/songwriter Dan Spirk debut single “So Good To Me” is a highly personal look into the internal conflicts of a man. With the track being written and performed on all instruments by Spirk, the single is a song of ambiguous and personal satire.

Delivered in a tongue and cheek romance. Wrapped up in “Bare Naked Rock & Roll” which will debut on November 26, 2017. The single will be available at http://danspirk.com.

An undeniable highlight of Spirk’s musical talent and versatility,” So Good To Me” recounts several real life experiences where we make mistakes but we are then in turn excepted for who we are.

“When I began to write this single, I was home sick with a lung infection, reflecting on countless mistakes that I have made in life and the toll those mistakes take on our loved ones as they in turn were able to forgive us,” says Spirk. “Therefore, the single reflects all these emotions and sends a message that life is to short and we have to learn to let go.”

Dan is set to follow the release of “So Good To Me” with the release of his debut EP “The Kiss Of Tenacity” anticipated, well-crafted five song album based on the personal trials and tribulations of not knowing when to give up and quit.

Spirk was spotted last night performing with his band The Love Rocket’s at New York’s oldest rock venue “The Bitter End” and is hard at work in the recording studio, alongside producer Craig Levy. He is planning the release of five new singles.

Spirk is a singer / songwriter / multi-instrumentalist from New York. As a child, he spent most of his time learning to play and perform as a self-taught drummer. In countless bands and scoring music for Indy films, Spirk not finding himself content, began writing songs and is known amongst his peers for being tenacious. Dan Spirk can be found on Facebook, Twitter and Instagram and at http://danspirk.com.

This press release was issued on behalf of the news source, who is solely responsible for its accuracy, by Send2Press Newswire. To view the original story, visit: https://www.send2press.com/wire/is-rock-music-making-a-comeback-dan-spirk-releases-debut-single-so-good-to-me/