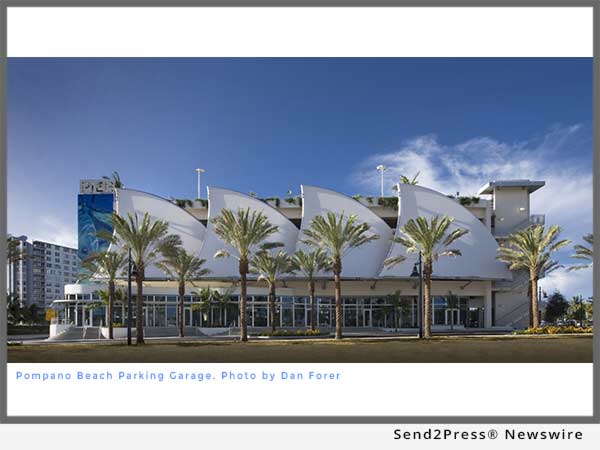 POMPANO BEACH, Fla., Jun 26, 2017 (SEND2PRESS NEWSWIRE) — One year ago, South Floridians were introduced to one of the most stylish parking garages ever built. The Pompano Beach parking garage, designed by Currie Sowards Aguila Architects (www.csa-architects.com), drew raves for its “wow” factor focal points including large Led-lit canvas sails that wrapped the exterior, a giant fish mural and a glass elevator.

The word “iconic” has been associated with the 599 space parking garage since its debut, and in the past year, a surge of economic development has begun around the garage, in the area known as the Pompano Beach Fishing Village.

Construction is currently underway for an oceanside restaurant and plans are set for several other restaurants and retail shops.

“Good design is an integral part of stimulating economic development, and this garage is the perfect example,” said Bob Currie, partner of the 48-year old architectural firm based in Delray Beach. “Any parking structure can provide its intended functional task, but when you are looking to create excitement, interest and community pride, designing a statement piece that your city becomes recognized for is a critical step in attracting developer interest.”

Currie Sowards Aguila Architects were honored to have been selected to design this structure, which has played an essential role in the ambitious plans by the City of Pompano Beach and the Pompano Beach CRA for the expansive redevelopment of the beach front.

“The leadership was strategic in understanding the importance of establishing a parking garage first, to allay any concerns about parking for potential restaurants and retailers,” said Jess Sowards, partner and principal on the parking garage project. “But equally important, they understood that design is essential to branding a city’s image.”

For almost five decades, CSA has partnered with municipalities to transform functional structures into branding pieces from parking garages to bridges, fire rescue stations to courthouses. The architects’ award-winning designs have helped cities across South Florida create their own distinctive character.

“It has been our privilege to work with city leaders from West Palm Beach to The Keys,” continued Sowards. “We take a very proactive partnership approach with municipalities to create structures that are not only cutting-edge all aspects of design, but we also help the leadership “sell” the project to city boards, commissions, neighbors and other stakeholders by having them understand the project and take part ownership in the design process.”

This press release was issued on behalf of the news source, who is solely responsible for its accuracy, by Send2Press Newswire. To view the original story, visit: https://www.send2press.com/wire/pompano-beach-parking-garage-designed-by-currie-sowards-aguila-celebrates-first-anniversary/