Whether or not Donald Trump chickens out of debating Hillary Clinton, Americans are already judging the speeches, statements, and pronouncements of the sane candidate and the angry orange orangutan. 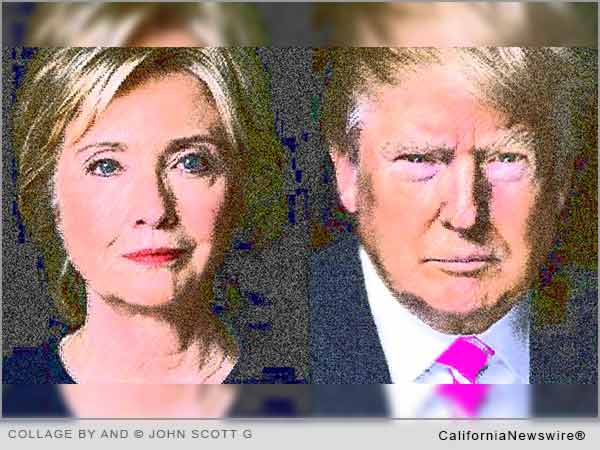 “Donald Trump will either skip the debates or he’ll do the first one and then skip the rest of them.”

The speaker was one of several self-identified independent voters at an informal gathering (read: party) held in Downey, a city located almost exactly midway between Los Angeles and Nutjobville (read: Orange County) in Southern California.

“Why do you think Trump would turn tail and run?” the speaker was asked.

“Because he’s going to get his ass kicked in a real debate.”

“You don’t think the GOP debates were real?”

“Hell no. Did you see any of the Republican klown kar kavalcade? They were practically fact-free. There was more substance in the moderator introductions of the Democratic candidates than in all of the Republican debates put together.”

Which got me to thinking about the disparity between the policy ideas of Hillary Clinton versus the “policy” “ideas” of “Donald Trump.” Here are just a few examples, and the contrast between the two candidates is instructive. . .

Hillary Clinton — Increase early childhood education and offer preschool for all 4-year-olds. Overall, strive to provide access to affordable childcare for every family.

Donald Trump — “Get that baby out of here.”

Hillary Clinton — Repair the Voting Rights Act and implement automatic voter registration to make it easier for everyone to vote.

Donald Trump — After proposing a massive tax cut for himself and corporations, Trump said, “I’ve talked to many people who have said mine is a good plan. A great plan. We’re going to make America plan great again.”

Donald Trump — “I’d like to smash the crap out of all of ’em, just like the old days. Believe me.”

Donald Trump — “I will put guns in schools and hospitals and other places.” (“But not at my rallies.”)

Donald Trump — “Extreme vetting. I call it extreme vetting. It’s like extreme sports but with the destruction of American values thrown in. And that’s at no extra charge, that I can tell you.”

Hillary Clinton — Wants to increase training, apprenticeships, and the building of 21st century skillsets for all workers. Seeks an increase in the minimum wage and strengthening rules about overtime pay.

Donald Trump — “Wages are too high, people. Things have got to change. We’ve got no choice, no choice.”

Hillary Clinton — Recognizes that the U.S. participation in the North Atlantic Treaty Organization is crucial to maintaining peace.

Hillary Clinton — Understands that our nuclear arsenal is for deterrence.

Donald Trump — “We have nuclear so let’s use them. I call it extreme diplomacy. Extreme. Diplomacy.”

Two people on the way out of the party were discussing the campaign.

“Does Trump realize how stupid he sounds?”

“You mean racists and retards?”

“Yeah, but hey, bigots and morons deserve representation, too.”

“That’s right. That’s exactly how America needs to deal with conservatism: stop it.”

The party broke up not long after that. Now if only the same can be said about the Republican Party.