What will it take for the sheep to see they’ve been shorn? How much damage to democracy will it require before people acknowledge the evil of Trump and the conservative movement? 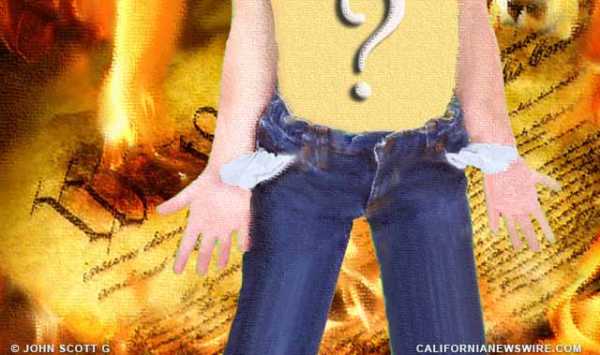 When you consider the harm being done to America by Trump and the conservative cabal, most sane people in the country experience the sensation of “eeww, I just threw up in my mouth.”

Never before in the history of our nation has the very nature of democracy been under attack from so many different directions. It has only been a couple of weeks since conservatives took charge and look what they’re doing:

* threatening stability in Europe by undermining our NATO alliances

* cozying up to plutocrat Putin

* reducing respect for the law by nominating another white supremacist, Jefferson Beauregard Sessions III, to be Attorney General

* threatening to destroy millions of families through massive deportations

Okay, we understand that many of you who stoked the Trumpster fire are racists and morons and there’s nothing that can be done about that. But many Trumpists are simply ignorant, and that can be remedied by providing you with some information about our country and its three (count ’em, three!) branches of government.

But — and pay attention to this — you and your family are going to be harmed by conservative policies.

Money: Trump and the conservatives are endangering the nation’s financial stability by nominating Steven Mnuchin to head the Department of the Treasury. This is a POS who foreclosed on 36,000 families in order to make quick profits for the bank he purchased.

Jobs: Trump and the conservatives are ensuring greater job losses, removing worker benefits, and lowering hourly wages by nominating Andrew Puzder to head the Department of Labor. To all you simpletons who believed Trump when he lied about bringing back manufacturing jobs — unless you can perform electro-mechanical maintenance on robotic equipment you aren’t going to have a job in manufacturing.

Money (again): Trump and the conservatives are allowing investment advisors to fiscally cheat you by removing the Fiduciary Rule protecting investors.

Life: Trump and the conservatives are threatening the air you breathe and the water you drink by nominating Scott Pruitt to head the Environmental Protection Agency. In addition to being a climate change denier, Pruitt has pending lawsuits against the E.P.A. — lawsuits he says he will not drop if he gets his hands on the agency.

Healthcare: Trump and the conservatives are threatening to remove the health insurance coverage of millions of Americans. By nominating Tom “Available for a” Price to be head of Health and Human Services, people will be more ill than before. There will be more pain and suffering. And more Americans will die.

Retirement: Trump and the conservatives don’t want you to have a retirement. As Bernie Sanders noted about Trump, “This is a guy who ran for president saying, ‘I’m the only Republican not going to cut Social Security, Medicare and Medicaid,’ and then he appoints all of these guys who are precisely going to cut Social Security, Medicare and Medicaid.” Mick Mulvaney (R-S.C.), Trump’s nominee to head the Office of Management and Budget, wants a piece of investments you’ve been making all your life. (And BTW, this is what the conservatards are referring to when they use the word “entitlements” — they’re coming after your money.)

When Will the Alarm Bell Sound?

At what point will Trump voters wake up to the damage being caused? How long until the ignorant Trumpers see they were just pawns in the conservative con game? Will it take another day? Another week? Another month?

Former Nixon lawyer John Dean stated that it will be a couple of years before it dawns on low-information rethuglican voters that everything Trump promised them was a lie.

That’s correct: it may take two years for Americans to realize they’re being played for suckers by the conservative movement.

Does America have that long?

Editorial Note: Be aware this series of political articles may contain intentional satire by author John Scott G and may not be fully based on fact (aside from some of the stupider things, which are sadly 100% real). Hopefully you can tell the difference?