Conservatives are performing verbal somersaults as they desperately try to explain and condone the reckless rhetoric of Donald Trump. One conclusion: Republicans love Big Brother. 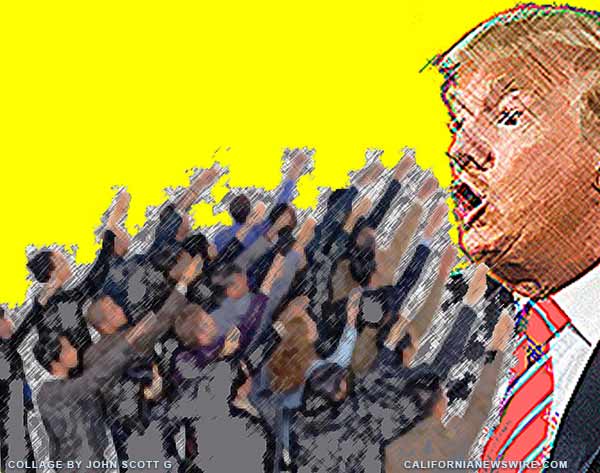 Before the election of 2016, conservatives were split into two groups:

(1) Those who were gleefully stoking the Trumpster Fire.

(2) Those who favored one of the other right-wing nut-jobs.

But now that Bulging Neck has eked out his Electoral College victory, many former anti-Trump conservatives are trying their worst to get into the good graces of the Spray-Tanned One. Here are several examples:

Joe Watkins, one of a horde of conservative apologists, had this to say on MSNBC when asked to comment on the Trumpster’s irresponsible, dangerous, and often contradictory views concerning nuclear weapons:

“Well, I, I think he’s, he’s being consistent, I mean, uh, uh, one thing that has been consistent about Donald Trump is that, uh, it’s very hard to, to know where he may stand on an issue and someone who may be a friend today can be an enemy tomorrow, uh, or vice versa — somebody with whom he’s had a terrible spat could end up being somebody with whom he gets along, so, uh, I think he’s, uh, uh, just, uh, being consistent.”

As you can tell, Watkins was describing “conservative consistency,” not the kind observed by sane people.

Kellyanne Conway has a long list of instances where she defied gravity to leap through the Hoop of Prevarication. For example:

* Kellyanne somehow feels that Team Chunkface has a mandate despite losing the popular vote.

* Kellyanne denies being associated with a campaign that was championed by white supremacists, Nazis, and the KKK. (Does this make Kellyanne Conway the 21st century Eva Braun?)

* And the #1 Kellyanne Conway whopper: “I can’t support somebody who lies for a living.” Apparently she was not allowed to finish her statement because the end of that sentence would have to be “unless I was paid enough money.”

T-Rump press secretary Sean Spicer was asked if he thought that Tinyhands’ description of grabbing women by their genitals constituted sexual assault and his response was “I don’t know, I’m not a lawyer.” When asked to clarify, his response was: “I never said it.” A recording of him saying it was played for him but he still stuck with his lie — thus proving that he will be the ideal press secretary for Dangerous Donnie Doofus.

Perhaps the most telling description of the conservative approach to lying comes from a “journalist” named Scottie Nell Hughes, a surrogate for the cabal that has formed around El Bloviator. When asked about the blizzard of lies being conducted by the leader of the Rethuglican Party, she had this to say:

I hear half the media saying that these are lies. But on the other half, there are many people that go, ‘No, it’s true.’ And so one thing that has been interesting this entire campaign season to watch, is that people that say facts are facts — they’re not really facts. Everybody has a way — it’s kind of like looking at ratings, or looking at a glass of half-full water. Everybody has a way of interpreting them to be the truth, or not truth. There’s no such thing, unfortunately, anymore as facts.

Setting aside the oddity of “a glass of half-full water,” that was one strange statement, although it was nice of her to confess that conservatism considers facts irrelevant.

George Orwell’s horror story about Big Brother is now a reality thanks to the 63,000,000 racists, morons, and greedgoons who helped conservatism hijack democracy.

In other news, a new American holiday has been announced: Walpurgisnacht, or The Conservative Onslaught of Witches and Warlocks. Mark your calendar. In honor of President Anus-Lips, it will be observed every January 20 until November 3, 2020. That’s the day decent Americans get their country back.