The race for the nomination of the Treason Party is heading toward a strange finish line called an ‘open convention’ or a ‘contested convention.’ Here is what will happen when irresistible farce (Trump) meets immovable idiot (Cruz). 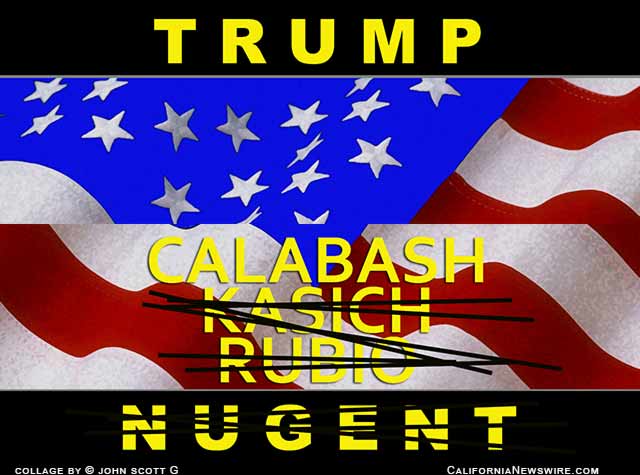 It all came down to one delegate. Donald Trump and Ted Cruz were in a mad scramble to reach the magical number of 1,237 (which represents fifty-percent-plus-one of the 2,472 voting members attending the Douchebag Party Convention in Cleveland).

Neither the bigot brigades of Trump nor the Radical Christian Terrorists of Cruz were able to arrive at the Mistake-by-the-Lake Prevention Center with enough votes to claim the right to lose to Hillary.

Yes, after eleventyseven campaign events, twelveteen thousand hours of bloviating, and two gazillion racist robo-calls, the hordes of syphilitic GOP morons couldn’t agree on which odious demagogue to put at the top of the ticket. Thus, we were treated to the spectacle of a good old-fashioned “contested convention.”

Days before the official opening of the conclave, the backroom brawls and hallway harangues commenced. Naturally, there was quite a lot of shouting, shoving, punching, and eyeball gouging, all conducted with love — the same love that leads rethuglicans to comfort corporations while worshipping the wealthy.

Votes were scrounged in every possible manner. Blackmail, extortion, and bribery were the order of the day. From the bowels of Trump Tower and the rape room of Cruz’ Texas ranch came the orders to their minions: “Get me the damn votes!”

“How far do you want us to go?” asked the toadies on each of their campaigns. And the response was the same from both the Trumpster and the Dreaded One: “Do anything! Use the blackmail stuff in the secret files! Offer them the ambassadorship to Jamaica! Offer them judgeships! Offer them girls! Offer them boys!”

Delegates were lassoed, corralled, coerced, bludgeoned, bamboozled, and bought. And it still came down to Trump being one delegate short.

“We’re working on her now.”

“Right. The last uncommitted delegate is a Mrs. Shirley Calabash of Berlin Heights.”

“Where the hell is that?”

“Okay, wherever. What does she want?”

“She says, and I know this is going to sound crazy…”

“She wants to be vice president.”

There was a long pause.

“How about two million dollars and some steaks?”

“We tried all that, Mr. Trump. She wants to be vice president.”

“Hell, we’ve already promised the VP to, like, a half-dozen people.”

There was another long pause.

And so it came to pass that Shirley Maude Calabash became the running mate of Donald John Trump. Like storied pairings of the recent past, this was a match made in heaven. It was even better than that time when mush-mouthed John McCain teamed up with mush-brained Sarah Palin. Or when Unfit Mitt paired off with GQ reject Lyin’ Ryan. It was such a nifty ticket that the Trump campaign rolled on to victory in three states, garnering almost two dozen electoral votes.

After Hillary’s inauguration, a reporter caught up to Shirley Calabash and asked how she had enjoyed the race for the presidency.

“Oh, I loved it. Being the number two behind Mr. Trump meant that things were very peaceful.”

“Certainly. None of you people were interested in anything I had to say, so the campaign was really just a nice vacation for me. Relaxing while getting paid is a good job if you can get it.”

“You’re telling me,” she said. “If we had won, that lazy oaf Donald would have quit inside of two months and I would have had to serve as president.”

“Well, you could also have quit.”

“You don’t think I’d let that little weasel Paul Ryan take over, do you?”

“No sir, I love my country too much. So, as president, I would have been facing a ton of work. But it all came out just fine. This way I got to take a tour of America, talk at a bunch of meetings with some very entertaining white people, exchange deep-fry recipes with the wives, watch a ball game now and then, have a sip of sherry, and you know, kick back. Whew, it was a whirlwind. Heck, I’m not even sure of my surroundings right now.”

“So what are your plans?”

“Well, I think I’m going to watch a little Megyn Kelly and then turn in.”

So, goodnight Mrs. Calabash, wherever you are.