And now, a parody of a recent screed in the New York Times that was scribbled out by a right-wing nut-job douchebag named David Brooks. 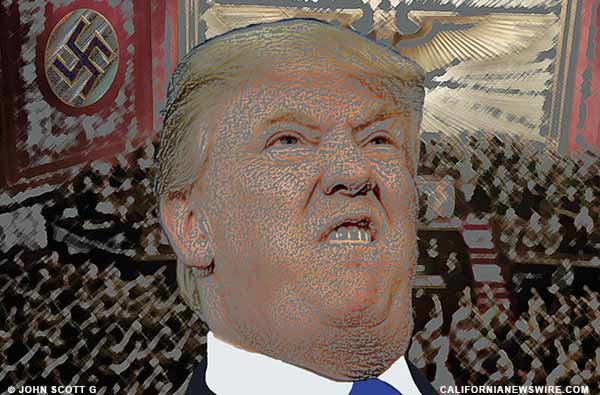 This is a column directed at high school and college students. I’m going to try to convey to you how astoundingly similar the Republican Party felt when I was your age.

The big guy then was Ronald Reagan and he was very similar to Donald Trump. Temperamentally and politically, Reagan was a descendant of the village idiot. Reagan got his stupidity from Herbert Hoover and his charm from a nest of cobras.

Reagan claimed to have a sunny faith in America’s support of freedom while pushing policies that subverted that ideal. He pretended to believe in the free market while promoting programs that undercut that goal. He feigned interest in the power of technology and wasted billions in harebrained schemes for missiles shooting at other missiles.

The party is no different today. Donald Trump isn’t spewing the Reagan lies about sweetness and light, but the results are just as disastrous for America. Trump expressed the GOP’s dystopian disposition in an interview with David Muir of ABC. When asked about his decision to suspend immigration from some Muslim countries, the orange one said: “The world is a mess. The world is as angry as it gets. What, you think this is going to cause a little more anger? The world is an angry place.”

Consider how Trump’s first week in office was all about fear and braggadocio. He has made moves to build a wall against a non-existent Mexican threat and build barriers against a non-existent religious threat. Worse, he is threatening to create black site torture chambers, presumably because our standing in the world has not yet sunk as low as it can go.

Trump should be on his political honeymoon, which could have been a moment of joy and promise. Instead of savoring the moment, Trump spent the week in a series of nasty squabbles about the size of his ratings, crowds, and hands. Trump seems to suffer from a unique malignancy — the ability to piss off decent people while pleasing those who are morally bereft and mentally retarded.

We have a word for people who are dominated by fear. We call them cowards. But Trump is also what is known as a POS. Trump was a POS in business — he took on enormous debt and then screwed people who trusted him. Trump was a lazy a-hole in the campaign — he appeared at televised national debates with no clue what he was talking about.

Now, as president, his is a policy of cowardice and absurdity. On every front, Trump wants to shrink the country into a shell while his primary advisor — neo-Nazi Steve Bannon — wants to blow it up.

Hunter S. Thompson once wrote, “Freedom is something that dies unless it’s used.” Americans, freedom is dying right now. Let’s get busy, organize, and work to eradicate the pestilence known as conservatism.