Card-carrying members of the GOP are divided over the idea of backing Donald Trump for president. Some oppose him whole-heartedly. Others support him half-heartedly. Less, even. Eighth-heartedly. Sixteenth-heartedly. And for good reason. 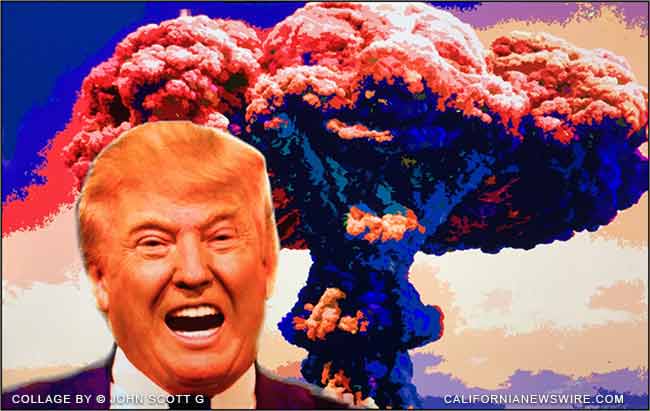 “Will you support the nominee of the party?” The question has now been directed at eleventy-seven of the also-ran GOP candidates as well as conservatives who are lusting for an appearance on the news and commentary programs.

Editorial Note: This satirical article has no relationship to any real-world “operative” or representative of the GOP. Be aware this series of political articles running up to the 2016 political election may contain intentional satire, by author John Scott G, and not fully based on actual fact (aside from some of the stupider things, which are sadly 100% factual).

“I will support the nominee of the republican party,” was the reaction from Ted Cruz, Marco Rubio, John Kasich, Chris Christie, Sarah Palin, and Ben Carson (with some wavering lately from Little Marco and the Boring Buckeye).

Opposing them is another group of republicans. Will they support the nominee? “Not if it’s Trump,” was the reply from Mitt Romney, Carly Fiorina, and a host of big money donors who normally back right-wing con artists and schemers.

Party regulars are always pressured to coalesce around the eventual nominee but Trump is a special case. “It’s not just because he is so incendiary and divisive,” a GOP operative told me.

“Is it because of Trump’s racism?” I asked.

“And his sexism and xenophobia?” I asked.

“And Trump’s call for violence at his rallies?”

“That’s another part of it.”

“How about Trump’s support of torture?”

“And Trump’s vow to compel our armed forces to commit war crimes?”

“And his call for flouting the Constitution on a host of issues?”

“Yes! Yes, it’s all of that,” was the somewhat wearied response.

“You seem down,” I said sympathetically.

“Look,” the GOP operative said, “republicans are accustomed to having a right-wing nut-job know-nothing as the nominee. That’s practically the GOP brand. The problem is that Trump is nuttier and more know-nothinger than any other candidate.”

“Everyone in the world with a conscience and an I.Q. above 80 knows exactly what you mean,” I said. “But are you saying Trump is nuttier than Ted ‘Let’s Carpet Bomb Civilians’ Cruz? Or Louie ‘Aspersions on my Asparagus’ Gohmert? Or Steve ‘Mexicans Have Calves the Size of Cantaloupes’ King?”

“Yes, he is further out than–”

“All right! Enough! I get it! Conservatives are screwed-up assholes who want to make the world more profitable for billionaires and multi-national corporations at the expense of most people. There. I admit it. Happy now? Feel better?”

“Yes, as a matter of fact, I do,” I said. “One can’t move on without first admitting there’s a problem.”

“Okay, okay,” the GOP operative said. “Some of us are just saying that of all the idiotic and dangerous republicans out there, Trump is the worst.”

“But a lot of republicans say they’ll support him,” I pointed out.

“Well, take a look at the Koch brothers and their super-douche fund. They collected millions from the richest butt-wipes in America and are prepared to spend nearly nine hundred million dollars to elect republicans.”

“They won’t do that if Trump is the nominee?”

“No, they’ll still spend the money, they just won’t be happy about it.”

“They don’t seem very happy about anything anyway, other than cackling whenever their industry poisons more families.”

“That’s true, but they’d be happier with a different candidate. But either way, they’re going to work hard to elect the best slate of candidates money can buy.”

“Okay,” I asked, “what about conservatives in the House, the Senate, the state legislatures, and in various crypto-fascist front groups like the Cato Institute, the Heritage Foundation, and the KKK? Will they back Trump?”

“The KKK for sure. Donald’s got all the white power and white supremacy cuckoo-birds on his side. But most elected officials and all of the right-wing fake research firms will just do the lip-service shuffle.”

“They’ll say they back Trump but it’ll be ghost-support.”

“Uh, well, let’s say I have heard of it. But, just to clarify, how does that work, exactly?”

“Okay, here’s what you do. After the nomination, you hold a press conference and say ‘I fully support the republican nominee.’ See?”

“Right. You sit back and watch the GOP death-spiral.”

“So, they say they support Trump, but then they don’t do anything?”

“Well, they’ll make sure their financial investments include a lot of defense firms. But that’ll make sense no matter who becomes president.”

“And if Trump wins, we’ll be attacking everybody all the time. For the military-industrial complex, a Trump presidency would be fat city.”

“Like winning the lottery. A cushy gig. Big paydays every day.”

“You bet. In fact, there’s only one problem with a Trump presidency.”

“Oh, it’s nothing, really,” the GOP operative said without looking at me.

“Come on,” I said. “What’s the main problem with a Trump presidency?”

“The end of civilization.”