Police issued a warning yesterday about a mentally-impaired man running amok on the White House grounds. In addition to posing a danger to himself, there are reports that he may be armed with remote-controlled nuclear devices. 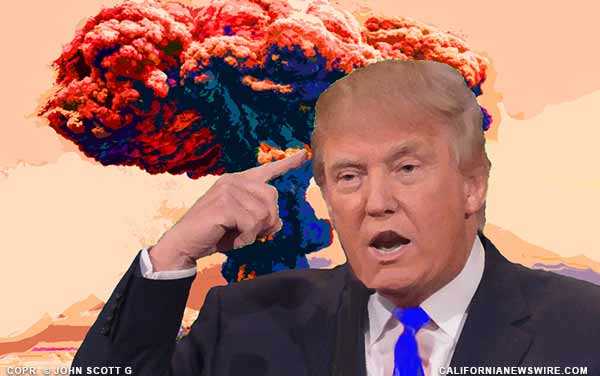 Note to readers who are mentally-challenged: this column contains satirical language to make real points about life — like the fact that the leader of the free world is, to use the technical term, a dangerous doofus.

Conservatives pose a threat to America for many reasons, not the least of which is the tremendous pressure being felt by law enforcement agencies who suddenly have a great deal to do.

Currently, there need to be investigations of:

* Russian hacking of our electoral process

* FBI collusion with the rethuglicans in the election

* Trump’s unconstitutional support for torture (a war crime, by the way)

* Trump cronies’ ties to the oligarchy in Russia

* Trump’s threat to the environment

* Trump’s attacks on the free press

* Trump’s call to “keep the oil” of countries we’ve invaded (a war crime, by the way)

And in the next days of the Mango Mussolini administration… Well, who knows? World War III?

Looking at the actions of this conservative administration leads to only one conclusion: the 45th president of the United States is a mental patient in need of treatment.

In addition to the above-mentioned litany of stupidity, consider:

> Trump claims that between 3,000,000 and 5,000,000 people voted illegally in the election — and that all of them voted against Trump. There is no evidence to support either of these positions. In other words, Donald J. Trump is making crap up.

> Trump claims that Americans do not care about his tax returns. In other words, Donald J. Trump is delusional.

> Trump claims he had a “massive landslide victory” in the Electoral College. In other words, Donald J. Trump cannot read the charts showing his win is in the bottom quarter of all results.

> Trump denies his blatant and disgusting mocking of a man with a physical disability — despite it being on video. In other words, Donald J. Trump is lying or self-duped.

> Trump claims that taxing Mexican goods isn’t collecting money from Americans when they make purchases. In other words, Donald J. Trump is too addle-pated to understand basic facts of commerce.

> Trump denies the scientific evidence of climate change. In other words, Donald J. Trump is mendacious or hoodwinked.

To Put it Bluntly…

Donald Trump is conservatism in a nutshell. (Yes, the pun is intended.) Conservatives have never before had such a perfect representation of their movement. Trump checks all the boxes: ignorant, bloviating, racist, misogynistic, xenophobic, greedy, heartless, and incapable of telling the truth. In addition, he’s bat-crap crazy.

What Side Are You On?

Everyone always knew that the U.S. electorate contained racists, morons, and greedgoons — the shock was learning that there are 63,000,000 of them. The question for Americans is: are you one of the conservative horde or do you possess fundamental human decency?

Now that sane people are beginning to wake up to the danger that conservatism poses to the United States of America, we all need to work to eradicate the forces that are currently turning us into the Untied Snakes of Murika.

For those of you who just recently become aware that ignorance, bigotry, avarice, and fascism have taken over our three branches of government — and if you want to do something about it — welcome to the resistance! It’s Conservatism versus America. C’mon, America, let’s get to work!