As conservative congress-critters hide from their constituents to avoid answering tough questions about the GOP’s anti-American policies, RWNJs of all shapes and sizes are spreading disinformation, deceits, deceptions, and outright lies. 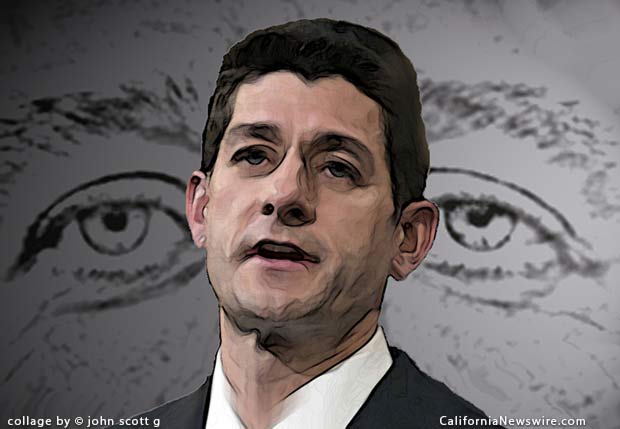 Inside the dank recesses of the conservative mind there is a whole lot of stupid going on. From Rep. Steve King’s racism to Kellyanne Conway’s alternative integrity, rightwingers are depositing steaming chunks of bulls#!t all over the landscape. Here are a few additional stool samples:

Paul Ryan (the Speaker of the House of Representatives and the “intellectual head of conservatism”) stood in front of video cameras and complained about the Patient Protection and Affordable Care Act (popularly known as Obamacare) because, he said, “Young and healthy people are going to go into the market and pay for the older, sicker people.” In other words, Paul Ryan has difficulty understanding a concept known as “insurance.”

Solution: Have Ryan and other conservatives swap their current healthcare plan for their newly-hatched scheme.

Conclusion: Jason Chaffetz is a moron.

John Shimkus (the misogynistic representative from Illinois’ 15th congressional district) doesn’t think people of the male persuasion should have to pay for prenatal care because that’s something for people of the female persuasion. Once again we are facing a conservatard who fails to comprehend the idea of insurance, not to mention failing to understand the concept of government doing things for the public good.

Roger Marshall (the condescending and hypocritical theocrat from Kansas’ 1st congressional district) says that lower-income Americans don’t take care of themselves and don’t want healthcare. That is insulting enough but then Marshass made it worse by invoking Jesus in his comments.

Prescription: Take Roger Marshall out behind the barn and administer a truth enema.

Paul Ryan (the Speaker of the House of Representatives and the “intellectual head of conservatism”) says he doesn’t care if his healthcare-for-fewer plan is a massive tax cut for the wealthy. His “let them eat cake” response to being called out on it was a shrug and to say he’s “not concerned about it.”

Idea: Create an emergency education plan for residents of Lyin’ Ryan’s 1st congressional district in Wisconsin so they become informed enough to toss this cretin out of office.

Sean Spicer (press secretary for Pretend President Dangerous Donnie) said that jobs figures from the Labor Department were fake in the Obama administration but they’re real now. Guess what, buttercup — math has not changed during the past few months.

Ron DeSantis (member of the House Treason Caucus and the representative from Florida’s 6th congressional district) thinks that cancer patients can just “show up to the emergency room.”

Mo Brooks (rightwing nutjob representative from Alabama’s 5th congressional district) said that opposition to bigot Jeff Sessions is part of a “war on whites.” Brooks has also spewed out the idea that healthcare is “welfare.”

Paul Ryan (the Speaker of the House of Representatives and the “intellectual head of conservatism”) is leading frantic GOP efforts to pass a healthcare plan that would take coverage away from more than 20,000,000 Americans. To Ryan, this is “a better way.”

Postulation: Paul Ryan doesn’t do math. Or compassion. Or leadership. Or American values.