Home National News Desk New Book, ‘The Origin of Language’ – The first scientific proof that finally explains the mystery no one has yet to...
SHARE
Facebook
Twitter 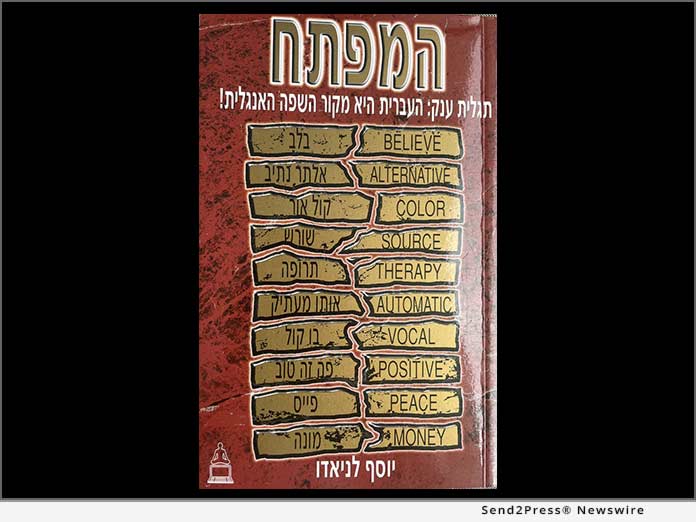 SUNNY ISLES, Fla., Oct 04, 2021 (SEND2PRESS NEWSWIRE) — Mr. Joe Lanyadoo is publishing his second book “The Origin of Language.” The first scientific proof that finally explains the mystery no one has yet to figure out; how language, an ability that required 4 simultaneous mutations in 4 different organs in a group of related people just appeared in humans. Language is a human species specific trait meaning it didn’t evolve, it just showed up.

All languages are made up of Hebrew Letter meanings that are encoded in our DNA. The Torah says: God Inserted Letter meaning not words into Adam that’s why god asked him to name everything, to create words by connecting those letters.

Professor Alec Marantz a linguistics professor at MIT has shown using EKG that the brain looks at each word as a sentence; he said, “We would see the same pattern of brain activity within a word as within a sentence, though more compressed in time.” He is saying the brain is trying to understand each letter.

All our Linguist geniuses didn’t notice Because No one cuts words to letters.

Illusion | Illusia -elou ze haya | as if it happened

Automobile | auto-mobil me (auti) | transfers me

Euphoria | yafeh or ya | pretty light of god

Macabre | Micaver | From the grave

Mr. Lanyadoo claims that Torah is the lost book of Tho that contains all the creation formulas. To and Rah are the names of the two Egyptian gods of Moon and Sun. Tho the scribe god wrote Torah and all myths. Mahabharata the Hindu “myth’ was written by him. Ma Bara Ta means What Created Tho in Hebrew. To understand the bible one needs to read all myths as one. Without knowing who Tho and Rah and their father Anu, or Noon are, there is no way to understand the ToRah or language. They are represented by the numbers One-An, Two – Tho, Three – Thorah. And are given 3 Hebrew letters To, Raish and Noon. Accident or design?

Tho created letters and the Cell and gave them his name. Ta is Cell in Hebrew and oT is a letter. Jewish holidays are based on Moon cycles, Shab-at means Sat Tho. He is the first letter in Torah and the last in the Hebrew Alpha. Thank- Tho-Anik =Tho Bestowed. This is confirmed by research scientists.

With the advancement of DNA research Scientists recently concluded that life was created by intelligent design.

“That some divine super engineer, in a single efficient strike, endowed humans with the power of language where formerly they had none.” Not my words but direct quote from the Chomsky’s NYT interview. An atheist who found god and changed his theory after I sent him mine.

I show that We speak hundreds of languages but the subconscious is literally programmed to understand only Hebrew Letter Meanings.

I was told I am ‘Navi Levav Hochma’ The Prophet of the heart of Wisdom. Understanding the Hebrew letters, the Living Word, is the heart of wisdom. MC2=CMC Shin.Mem.Shin spells Sun in Hebrew.

This press release was issued on behalf of the news source, who is solely responsible for its accuracy, by Send2Press Newswire. To view the original story, visit: https://www.send2press.com/wire/new-book-the-origin-of-language-the-first-scientific-proof-that-finally-explains-the-mystery-no-one-has-yet-to-figure-out/