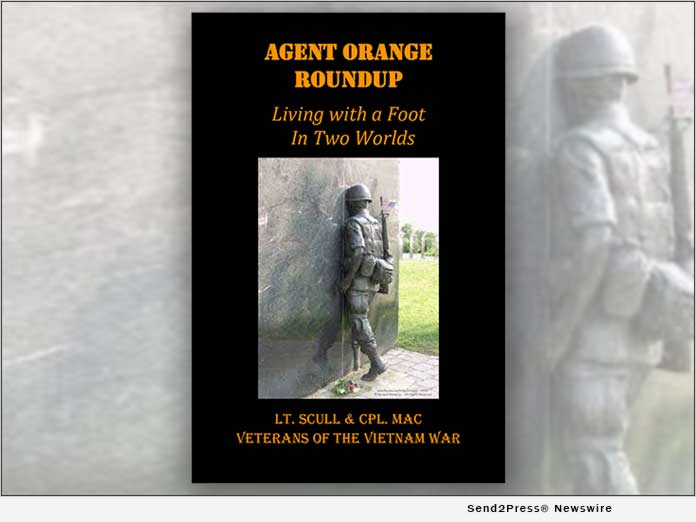 This tells of the loss of innocence, betrayal and final acceptance of Stage 4 cancer 50 years after their tour of duty. The Department of Veteran Affairs estimates over 300,000 Vietnam Veterans have died from the herbicidal defoliant known as Agent Orange; The Vietnamese casualties are in the millions. This collection of powerful art, prose and poetry captures their journey from the home front, into the meat grinder and the long struggle for recovery.

Designed to eliminate forest cover for the enemy and to destroy crops, AO’s widespread use from 1961 to 1971, has resulted in birth defects that are multi-generational affecting both cultures. TCDD in Agent Orange is the most toxic of dioxins for it does not readily break down or decompose. If dioxin is the most toxic compound, glyphosate in Round Up is the second. Both herbicides are known cancer causing agents. Perhaps most disturbing is the documentation of the ongoing involvement and of a chemical conglomerate involved in Mustard Gas, Zyklon B, (Auschwitz), Agent Orange, Roundup and now, Dicamba.

“We live, slowly die and struggle with these warrior poets who across decades of soul surrendering poetry take us from innocence and idealistic childhood into war. We follow them (the authors) through moral awakening homecoming discovery of their cancers and ultimately their spiritual awakening.” — From the foreword by Dr. Ed Tick, psychotherapist, founder of Soldier’s Heart. Author of, “War and the Soul” and “Warriors Return.”

Lt. Charles “Sandy” Scull, a transpersonal psychologist and Cpl. Brent MacKinnon, M.A., a non-profit nomad, will join the hundreds of thousands felled by dioxin. This work is offered as a public service and a testimonial for the many veterans who have left us, the many affected still among us and their families.

Lt. Charles “Sandy” Scull, a transpersonal psychologist and Cpl. Brent MacKinnon, M.A. a non-profit nomad, will soon join the hundreds of thousands felled by dioxin. Scull’s poems have appeared in poetry journals and anthologies, and appeared on Book’s TV and Bill Moyers Journal. He appeared on the Oprah Winfrey Show as an expert guest for his anthology,” Father, Sons & Daughters” (Tarcher/Putnam). He and MacKinnon met on a trip in 1988 to Russia and Kazakhstan to offer counsel to veterans of their war in Afghanistan.

MacKinnon has worked with Native Americans, Vietnamese, Latinos, prisoners and CAP poverty projects. He has published several books on his journey of wartime survival. An exile from his own culture, he served two tours in the Peace Corps. While in the Marine infantry he was assigned to live alone in the village of Nong Son. That experience began his teaching career.

The book is available on August 10 from Amazon, Kindle, Bookstand Publishing and the topic is discussed on a Facebook group: Agent Orange Roundup: https://www.facebook.com/Agent-Orange-Roundup-115065550296874/