LOS ANGELES, Calif. /California Newswire/ — With lyrics inspired by famed poet, Lord Byron, Gabriele Ciampi’s, “She Walks in Beauty” was composed and orchestrated by him to pay tribute to the heroes on the frontline of the current pandemic. This eloquent music video serves as a glimmer of light at the end of the tunnel with the promise of a return to normal. The video and song will be released, worldwide, on May 15 by Universal Music Group.

Ciampi, a globally-acclaimed musician, was struck by how Byron’s poem could be musically translated into a pandemic metaphor. 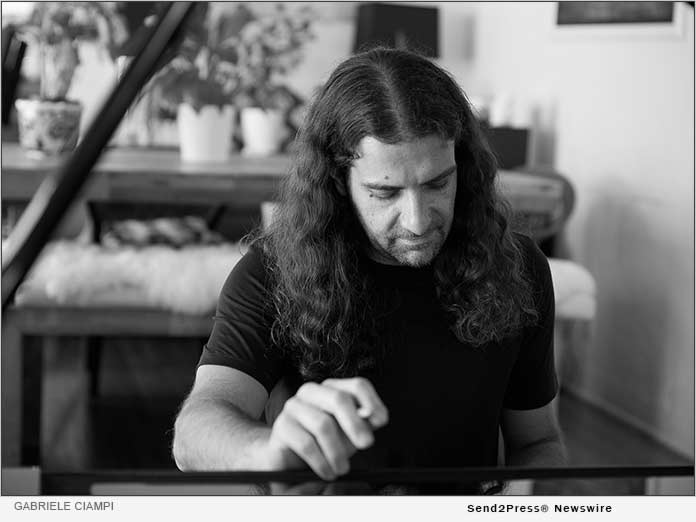 “Byron writes about how a woman’s beauty is in harmony with the natural forces of light and dark, much like the opposing forces society is currently dealing with – the daily uncertainty balanced by the future of hope,” he says.

The darkness of the night represents uncertainty and the fear of a terrible, unknown disease. But, when the woman’s gaze lights up and she smiles again, it’s the hope of returning to normality.

Ciampi, who typically composes and orchestrates, plays piano in this new release too. And, it’s original orchestration and arrangement was all done while he was in quarantine.

Video footage epitomizes how this tragedy escalated and affected people across the world, with a focus on Italy, China and the United States. Moving images include Pope Francis’ prayer in the deserted square; coffins in the mass grave on New York City’s Hart Island; a nurse collapsing on her computer keyboard; the procession of military trucks through Bergamo loaded with dead bodies; and many others. And then – a light of hope.

A baby is born to a recovered patient who leaves the hospital to the applause of nurses, and tricolor arrows crisscross the sky like musical notes on the score of this hymn which is dedicated to frontline heroes.

“Generously lending her voice to this project is my friend Teura, an Italian singer,” Ciampi says. “Teura is an artist and single mother of two young daughters living in the Italian countryside province of Ostia. She supplements her income as an artist and supports her family by operating a small cafe which was closed because of the pandemic. She represents the many single mothers in Italy currently trying to overcome the insecurity of supporting a family while not able to make a living.”

Watch the music video, “She Walks in Beauty,” here:


Gabriele Ciampi, Teura - She Walks In Beauty
Watch this video on YouTube.

Ciampi has received many accolades throughout his career. He was the first Italian to perform at The White House at the invitation of former first lady, Michelle Obama; he received the “Italian Excellence” medal, granted by the Senate of the Republic of Italy; and the Green Card for Extraordinary Ability, issued by the U.S. government. In 2016, the Vatican invited him to to play for Pope Francis at the Auditorium Parco della Musica in Rome. He’s also a Grammy Awards’ voting member.

For more information about the artist: https://www.gabrieleciampi.com/