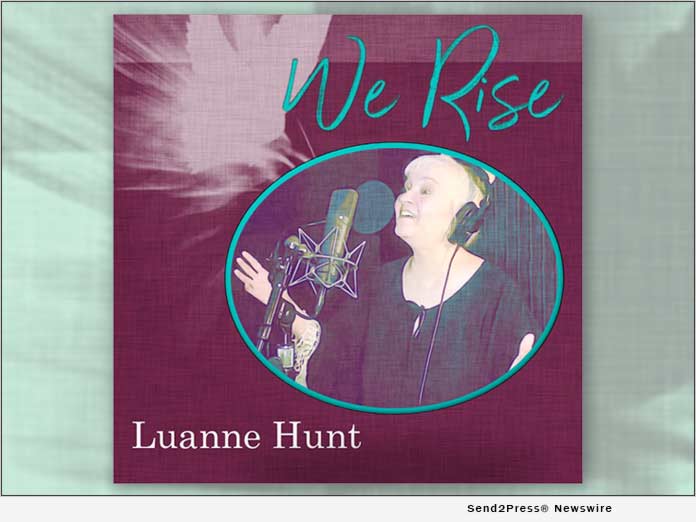 LAS VEGAS, Nev., May 21, 2020 (SEND2PRESS NEWSWIRE) — Amid the Coronavirus lockdown, award-winning, critically acclaimed indie music star Luanne Hunt decided to use her free time to tap into her creativity and write the Top 40 Gospel/Inspirational hit “We Rise,” a song the Hollywood Digest calls an “anthem for our times.”

The uplifting song can be heard on radio stations around the world and is currently climbing the Adult Contemporary and Christian Music charts.

Other reviewers see it as a musical dose of inspiration, bringing the same type of hope and healing found in Jack Canfield’s “Chicken Soup for the Soul” stories. According to Troy Johnston of FAME Magazine, “We Rise” is just what the doctor ordered to lead people from all walks of life to a brighter and more abundant tomorrow.

“Beautifully presented and enchanting from the start, Luanne Hunt’s ‘We Rise’ is the Chicken Soup of song we humans need,” said Troy Johnston of FAME Magazine. “It’s a winner of a tune that puts humanity back into perspective and reminds us as listeners that thinking positive and spreading joy to others is as simple as it gets.”

Hunt, who lives in Las Vegas, Nevada, wrote “We Rise” as the theme song for a philanthropic organization she is preparing to launch in early 2021 called, “We Rise Women’s Network.”

The network will aim to provide women across the nation opportunities to gather, make lasting friendships, heal from wounds of the past and tap into their inner strength through the power of togetherness, Hunt said.

“When I began making plans for the Network, the first thing I did was write the theme song for it,” said Hunt, a native of Conshohocken, Pennsylvania. “As ‘We Rise’ came together in the studio, I realized it holds a message that people need to hear right now. So many are running out of hope but united, we are strong. I have no doubt we can rise above everything that’s threatening all we hold true and dear.”

Over her 25-year career, Hunt has scored numerous No. 1 hits on country, folk and gospel charts around the world. The award-winning, Grammy-balloted recording artist is best known for her chart-topping single, “Christmas Without You,” which was named by Sweden’s largest daily newspaper, Dagens Nyheter, one of the Top 25 Christmas Songs of All-time.

She also is the recipient of three CD of the Year awards from the National Traditional Country Music Association (NTCMA) and six American Songwriting Awards.

“Fans that love the Andra Day song ‘Rise Up’ should take a chance on Luanne Hunt’s ‘We Rise,'” said Garth Thomas, reviewer for the Hollywood Digest. “I’m positive that Hunt’s country fans will stick with her and love this song, which is both inspiring and entertaining.”

This press release was issued on behalf of the news source, who is solely responsible for its accuracy, by Send2Press Newswire. To view the original story, visit: https://www.send2press.com/wire/indie-music-star-luanne-hunt-delivers-chicken-soup-for-the-soul-message-in-her-top-40-hit-single-we-rise/