SAN JOSE, Calif. /California Newswire/ — On Jan 26, 2020 a non-profit volunteer organization called Heavenly Culture, World Peace Restoration of Light (HWPL) had joined forces with the city of San Jose to beautify the community and the parks of San Jose.

What kind of results can an international peace organization do for the community of San Jose? The results would be partnering up with the San Jose City to create volunteerism of 100 people to clean and beautify a local park that is known and loved dearly. All in a matter of a few days of planning prior to the event. 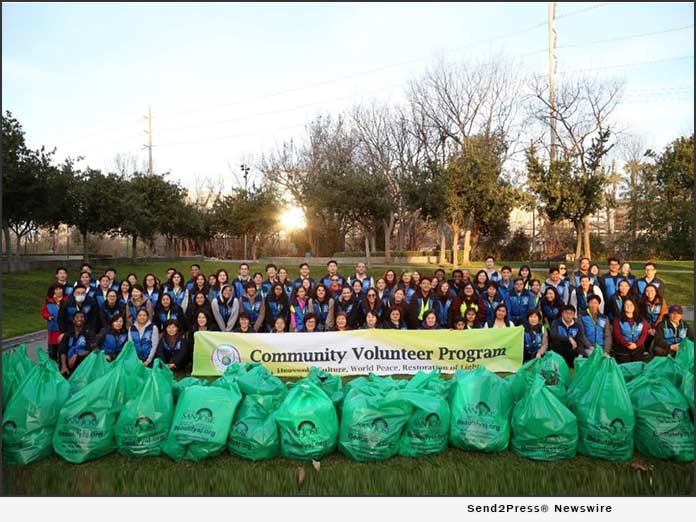 Heavenly Culture, World Peace, Restoration of Light, colloquially referred to as HWPL, is a non-profit, non-governmental international peace organization. Although it was initially established in Seoul, South Korea, the peace group has branches located in over 200 countries, including one now established in the Northern California region.

As a group working alongside the United Nations to achieve global peace, HWPL collaborates with the International Women’s Peace Group (IWPG) and the International Peace Youth Group (IPYG) as the organization’s wings in accomplishing international tranquility. HWPL, within the last five years since the establishment of the organization, has found much success in achieving their goals toward peace and volunteerism. The HWPL volunteer programs are recognized as one of the most successful and active volunteer associations around the world.

With over 100 volunteers participating last Sunday, local neighbors, friends, and family filled bags of trash and debris to prevent pollution from washing into the creek and around the city park. With the help of the city providing supplies such as litter sticks, pairs of gloves, volunteer vests, and trash bags, HWPL volunteers were able to diligently give back to the community. Staff members gathered from 2:30 p.m. to collect the equipment and set up booths to distribute tools to pick up trash.

Participants started from 3 p.m. until sundown. Not only is the work of collecting the trash and debris beautifying the community, but it also helps with the anti-graffiti and anti-litter programs of San Jose in their mission to improve the health of the city’s environment. This is done by preventing and removing trash throughout the neighborhood.

Arena Green Park, across the street from the San Jose Sharks stadium, is located in the heart of Downtown San Jose. Within the Silicon Valley, many residents struggle financially with the high cost of living beside the affluent, middle-class community. Despite the city’s proactive approach to help the low-income and homeless citizens, some residents still face dire poverty.

“One of the biggest problems that the parks face are the trash produced by the homeless community. This is seen at Arena Green Park especially, where sports fans from all over the world visit,” one HWPL volunteer stated. “It seems to be a never-ending problem.”

With a goal of creating a cleaner and less-polluted environment for the people of San Jose, HWPL strives to collaborate with the city of San Jose to create a beautiful home for the residents of the city. Regardless of gender, race, religion, or political differences, the peace volunteer organization encompasses the human desire to volunteer and lend a helping hand.