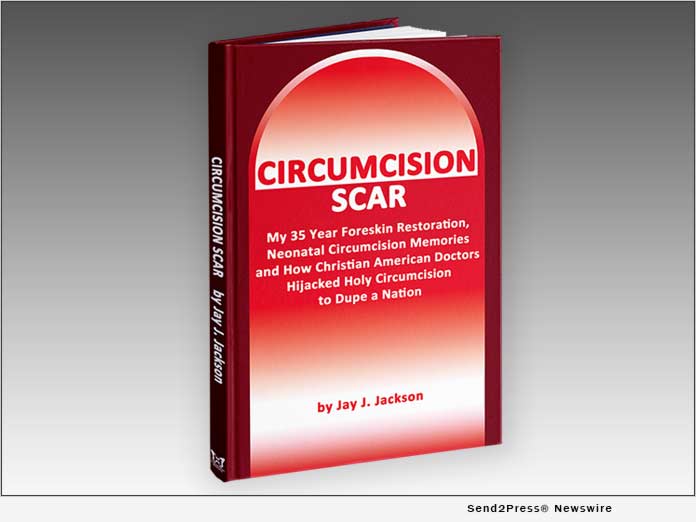 Jackson also debunks the alleged health benefits of circumcision to expose a cultural bias bent on eradicating foreskins from existence.

Haunted by intensely vivid recurring nightmares since childhood, Jackson was in his 50s when he realized he was being tormented by repressed memories of his circumcision performed as an infant.

Jackson states, “We all possess memories of every moment we’ve ever experienced, but we’re unable to access most of them without a powerful emotional trigger to bring them to the surface.”

In his LGBTQ memoir, Jackson details the psychological torment his circumcision caused and the detrimental impact it had on his sexual function. In seeking treatment for his condition, Jackson was accosted and chased out of exam rooms by doctors who branded him immoral and perverse for suggesting circumcision is harmful. Jackson eventually found a surgeon sympathetic to his plight and agreed to treat him.

Jackson endured two experimental surgeries to repair the damage done to him at birth, only to be shunned by hospital nurses who refused to care for him because they didn’t approve of what he’d done. Jackson explains, “Their behavior was childish and unprofessional. It’s hard to believe circumcision is anything but cult doctrine when alleged professionals act like that for puritanical reasons alone.”

Jackson’s book debunks the alleged health benefits behind circumcision with facts and statistics, and he takes particular offense with comparing circumcision to a vaccine as a preventative for HIV/AIDS. “They used that exact argument for circumcision and syphilis a hundred years ago, but the statistics don’t hold up. Foreskins aren’t the plague, they’re a natural part of the male anatomy. To call circumcision a vaccine is dangerous and delusional.”

Jackson believes his book faces an uphill battle because most readers will refuse to hear the facts. “Circumcision is the oldest cult ritual in history, and it’s rooted in religion. As a gay man, I know all too well that people are motivated to protect religion over children, and they’ll say and do almost anything to uphold that bias.”

Jackson equates circumcision forced upon any child as nothing less than sexual mutilation. “It’s important for everyone to know, the doctor credited with making circumcision commonplace in America, was obsessed with circumcising all women too. Every child, boy or girl, has the right to be who they were born to be. No baby should be forced to undergo a surgical alteration at birth to remedy a malady that doesn’t exist.”

Jackson’s book depicts how the results of his surgically restored foreskin were so convincing that his doctors, and even his husband of 30 years, believed he had a natural foreskin. But Jackson remained unsatisfied, and decades later, used manual stretching techniques to complete his transition. Techniques, Jackson points out, that date back to ancient times.

“Circumcision is a fundamental human rights violation, and restoring my foreskin was the cure. No one has the right to force surgical conformity onto children to make them fit their idea of morality.”

Jackson’s book details how Christian American doctors usurped First Amendment religious freedoms to mandate the oldest surgery in history onto a nation. The overzealousness used to sell circumcision to their patients included an alleged cure for distemper in children, to the US government providing prostitutes on Navy boats in exchange for foreskins, to the wild claim that one patient’s foreskin caused him to develop a brain tumor.

Jackson elaborates, “No parent wants to believe they’ve harmed their child for no reason, but that’s the lie these doctors have forced upon us.”

Jay J. Jackson is a freelance writer in Los Angeles and is an avid “Star Wars” and “Star Trek” fan: “One offers a mythological alternative to religious fables, the other, hope for humanity’s future where we’ve outgrown the inane aspects of those fables in favor of acceptance and unity.” Jay hopes his story will inspire parents to prioritize protecting children over protecting religion.

“Circumcision Scar” will be released September 8, 2020. To preview the book visit: http://www.circumcisionscar.com/.

The book can be pre-ordered in hardcover or Ebook at Amazon, Barnes & Noble, Google Play, Apple Books, and local bookstores via IndieBound.