SAN DIEGO, Calif. /California Newswire/ — The Pillai Center For Mind Science will host a free live-stream webcast and Google+ Hangout on July 28 to present the power of sounds to increase intelligence. The free webcast will provide a forum for collaborative discussion to researchers, doctors and mystics worldwide. 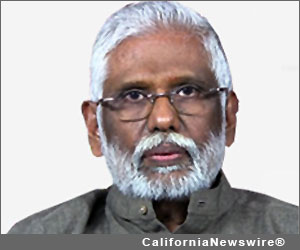 * 5 Steps to Extract Power From Sounds;
* Scientific findings on how sounds change DNA: Encoded sounds in DNA have been linked by scientific research to success as scientists, bankers, Hollywood producers and gurus.
* Secrets of the "Wisdom Gene": the history of power sounds in the Yogic and Jewish traditions:

"Thinking can create and what is thinking? Thinking is just using sounds. Sounds do create. Sounds can influence your genes. Sounds carry intelligence, so my equation is: Sound equals Intelligence. I will explain the process to understand the process of the philosophy of sound," says Dr. Pillai.

Dr. Pillai will cover five steps which he said will help people create what they want with just the power of sounds:
1.Uncover the mysteries around the power of sound;
2.Understand the science behind the "Wisdom Gene";
3.Decode the meaning of sounds;
4.Identify the sounds that help;
5.Activate the ancient sounds to open a new reality.

People have reported remarkable success with working with the sounds to achieve their goals: "I used Dr Pillai's [sound] technique for Material Comfort … and was able to manifest a 2-story house in 4 months. Years later, I followed Dr Pillai's teaching to work with the seed sound 'SHREEM' to attract wealth … and a larger and more beautiful house," said Vijay, Singapore.

"Working with the secret sound frequencies given to me by Dr. Pillai my life has transformed in one year more than I could have ever imagined," said Saj P., Internet Entrepreneur, U.K.

Guests will present findings and research on the cultures traditions which used sounds for intelligence:

"What I want to do ultimately is to unravel the sounds that can give better intelligence for the entire human race. And so that is precisely what has been in my mind and that's what started this forum," said Dr. Pillai.

Dr. Pillai has brought meditations to a world-wide audience for over thirty years: He was the teacher who gave the Ah Meditation to Wayne Dyer. Meditations from his book "One Minute Guide to Prosperity and Enlightenment," published in 2004, are practiced by over a million people worldwide. In July, 2008, he introduced the Grace Light Meditation, received by more than 400,000 online YouTube participants.