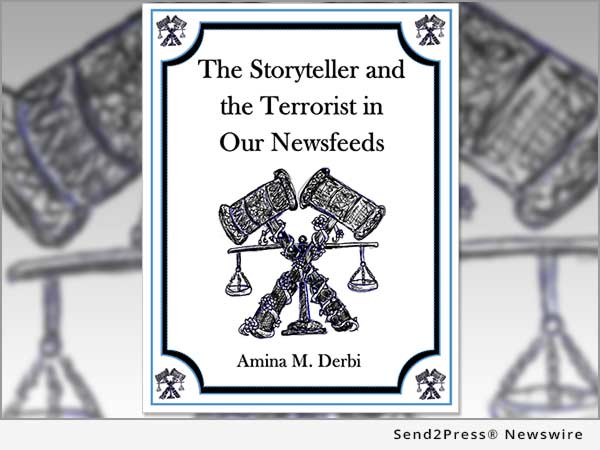 WASHINGTON, D.C., Jul 08, 2016 (SEND2PRESS NEWSWIRE) — At the peak of a highly controversial election year, a new thriller for young-adults has recently been published featuring a teenaged Muslim girl as the protagonist. “The Storyteller and the Terrorist in Our Newsfeeds,” by Amina Derbi, is about the rise and fall of seventeen-year-old Najmah Qamar, a passionate storyteller who ends up living through her worst fears as her tales come to life.

It is the first book in “The Storyteller Series,” written by Amina Derbi, which will grab readers by the soul and shake them until they feel the words written not just into their minds, but carved into their bones like the initials of a loved one into a tree trunk.

Najmah Qamar is famous among her friends for always telling stories while baby-sitting, at family gatherings, or just hanging out on a Saturday night. After making a YouTube channel for her stories, the videos go viral and Najmah’s fame begins to sky-rocket along with her self-confidence and popularity as people from all across the U.S. and even abroad start sharing them on social media.

However, to Najmah’s horror, her stories start coming to life and people start dying in her northern Virginia town and surrounding areas. The media coverage surrounding these events becomes obsessive as the murders become linked with the YouTube sensation and some news outlets even refer to her stories as the “terrorist tall tales.”

Friendships are tested as trust falters along the lines of race, gender, and religion when Najmah gets blamed for the homicides. However, the stories are available to thousands of people from a variety of different backgrounds who have viewed, liked, or followed Najmah on social media. The real terrorist could be anyone in her newsfeed, even someone she knows well. As Najmah tries to discover who the mastermind is, her own life becomes threatened when she comes closer to unveiling a deep dark secret which has been hidden for decades right under the nose of the nation’s capital.

When asked why she started writing “The Storyteller Series,” Derbi replied, “Najmah is the sort of protagonist I wish I had a chance to read about when I was in high school and I know her story will break barriers and contribute to the very pressing conversations many readers are having about diversity right now.”

In addition to being hooked by the suspenseful plot, readers will also find themselves rooting for Najmah as she tries to stay alive while proving her innocence, stopping the murders, and attempting to maintain her friendships. This story, set in the suburbs of northern Virginia, runs about 59,700 words and is somewhat similar in tone to Stieg Larsson’s “The Girl With the Dragon Tattoo” and Orhan Pamuk’s “Snow.”

Here is a link to the book’s website with more information regarding Derbi’s mission as an author, the series, and how readers can dive into its digital pages today at http://www.thestorytellerseries.com/ .

*PHOTO for media: Send2Press.com/mediaboom/16-0708-storyteller-300dpi.jpg
*Photo Caption: The cover of book 1 of The Storyteller Series, as seen on Amazon Kindle.

This press release was issued on behalf of the news source, who is solely responsible for its accuracy, by Send2Press Newswire. To view the original story, visit: https://www.send2press.com/wire/brand-new-novel-challenges-stereotypes-by-featuring-a-muslim-heroine/