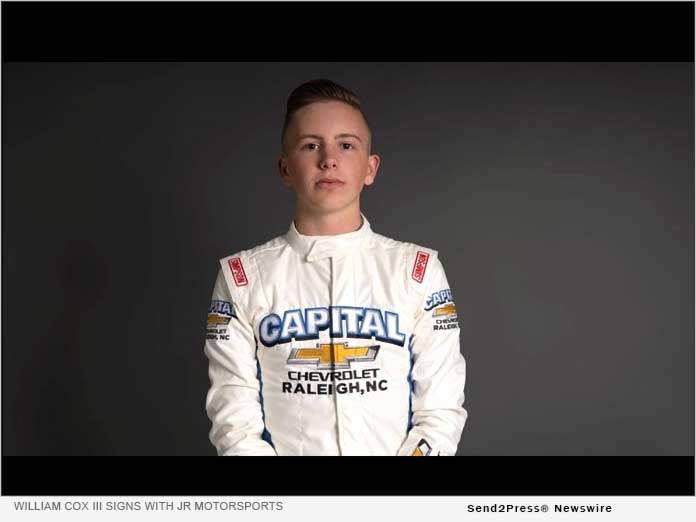 Cox, a resident of Raleigh, North Carolina, is poised to compete in his first full-time Late Model season. At the astonishing age of 15 he is joining a program with an impressive list of drivers including Anthony Alfredo, William Byron, Christian Eckes, Sam Mayer, and others. He will also be a member of the Chevrolet Driver’s Edge Development team for 2021.

Rising quickly through karting and U.S. Legend Car ranks, Cox has arrived at JR Motorsports. A dream he’s had since his first brush with speed, when as a small boy he attended a sports car race at Virginia International Raceway with his father. Subsequently after discovering a love for racing he began driving go-karts following a test at GoPro Motorplex in Mooresville, N.C. Competing in the local karting ranks the following year, Cox expanded into the national touring groups in the United States and Canada. After competing three road races, he earned his SCCA license in 2019.

“This is amazing, and I cannot thank JR Motorsports enough for choosing me for such an awesome opportunity,” Cox commented. “It’s going to allow me to bring my performance up to another level because now I have such great equipment. Instead of it being about relying only on the equipment, I can now focus on improving myself as a driver and enhancing my abilities.”

Cox will be working alongside veteran driver, teammate, and mentor Josh Berry, who served as one of his instructors during the Late Model test at Hickory Speedway in North Carolina last season.

“He’s got so much experience and has accomplished so much,” Cox said of Berry. “With him having helped me from day one, now that he’s my teammate, I have a great coach standing beside me.”

“I’ve been around a lot of talented drivers in my career and William is certainly going to turn heads and make statements,” offered Chad Bryant, owner of Chad Bryant Racing where Cox formerly competed, “We’re proud of his success and look forward to seeing him strengthen his resume not only next year, but down the road, too.”

Cox shifted to U.S. Legend Car racing to begin training on ovals on the advice of driver development manager Lorin Ranier. While competing in the Young Lions division around the Southeast, Cox led all 30 laps of the U.S. Legend Car Nationals championship race at Carteret County Speedway in North Carolina to earn the Young Lions national championship. Shortly after that Cox was leading the World Road Course Finals in Atlanta but ultimately finished third due to contact with another competitor. Last season, Cox moved up to the U.S. Legend Car Pro Series and planned a full season but was unfortunately derailed by the coronavirus restrictions.

During his down time, when not racing, William Cox attends online classes through Liberty University’s Online Academy.

Cox continues to be a force to be reckoned with, as he is considered one of the youngest rising stars on the track, yet maneuvering himself as a solid racing veteran.

JR Motorsports is the management company and racing operation for Dale Earnhardt Jr., NASCAR’s 15-time Most Popular Driver and winner of 50 NASCAR-sanctioned races. Now in its 20th year of overall competition, JR Motorsports races in multiple divisions, including the NASCAR Xfinity Series where it won championships in 2014, 2017 and 2018. The company also competes in Late Model competition and owns five championships in regional late model divisions. To learn more about the organization, its drivers and its sponsorship opportunities, visit http://www.jrmracing.com/.

This press release was issued on behalf of the news source, who is solely responsible for its accuracy, by Send2Press Newswire. To view the original story, visit: https://www.send2press.com/wire/william-cox-iii-signs-with-jr-motorsports-late-model-team/