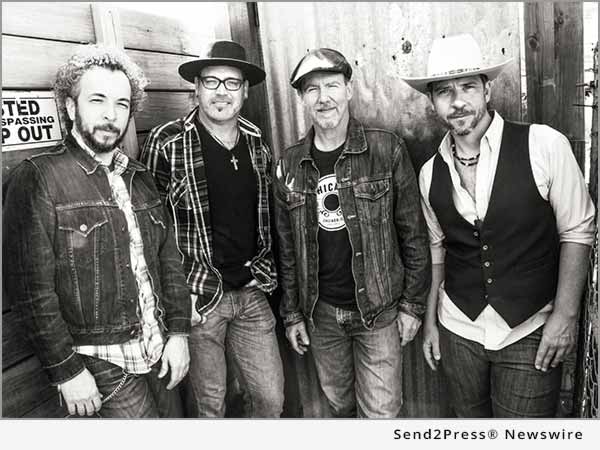 AUSTIN, Texas, Jun 22, 2016 (SEND2PRESS NEWSWIRE) — On July 12 The South Austin Moonlighters will be releasing “Ghost of a Small Town,” which features 13 brand new songs including their new single “You, Love and Me.” The album will be available on iTunes, on their website (www.southaustinmoonlighters.com), on Amazon, CD Baby, at the shows and at Waterloo Records and discriminating independent record stores everywhere!

If you’ve seen more than a handful of live bands that tour Texas, there’s a pretty good chance you’ve already seen most, if not all, of the musicians who make up the South Austin Moonlighters. Lonnie Trevino, Jr, Phil Bass, Chris Beall and Phil Hurley: these guys have earned their place among the elite of Austin’s burgeoning music scene and have played key roles in bands like Fastball, Monte Montgomery, The Whiskey Sisters, Stonehoney, Jimmy LaFave, to name just a few on a long, long list.

“I called my dear friend and favorite drummer Phil Bass,” says Lonnie Trevino, bass player and vocalist of the band. “We toured together while with Monte Montgomery in 2001, and Phil loved the idea and jumped on board before I could finish explaining what we were planning to do. From the moment we hit the first note it was obvious that something special was happening.”

“It was one of those things where you’re with your friends and you say, ‘Someday we’ll all get together and just play what we love,’ says Phil Hurley, lead guitarist and vocalist. “And then Lonnie had the audacity to actually book some gigs!”

Who plays what? Lonnie Trevino, Jr plays bass, Phil Hurley and Chris Beall share lead and rhythm guitar duties, and Phil Bass plays drums. You can hear that this band is comprised of four legitimate singers on each and every song on this new album – each member has a turn at singing lead vocals. More impressively, perhaps, is that all four band members write.

Precise vocal harmonies are an important part of the Moonlighter’s signature sound, alongside what Matt Blackett of Guitar Player Magazine called “gritty blues, nasty funk, R&B, pop, rock,” and Andrew Conroy of Austin’s KUTX described as “a band that blends blues, Americana, soul, rock, and country, who can flip the switch from slow melodic country to gravelly rocking blues without a hitch.”

Even the genesis of this new record is unusual – the band recorded at Chris Beall’s at-home studio, and self-produced the effort. “Initially we were thinking of just using my studio a few times to get some ideas down, but it all started sounding really good so we just kept coming back and putting down more songs,” says Chris Beall, of this somewhat unorthodox approach.

“I’m really into creating a vibe – a distinctive emotional quality or atmosphere that is sensed or experienced by the listener,” says Phil Bass. “That style of Production appeals to me, and I know these guys feel the same, because it’s coming through in our music.”

The South Austin Moonlighters are regulars in most of the finer honky-tonks, listening rooms and venues throughout Texas, and when the new record is released in July they will be stepping up their already aggressive tour plans. Look for their first European tour coming in early 2017. Look for them at a discriminating venue or music festival near you soon.

For more information, interviews, and physical copies of the record or anything else you might need, please reach out!

Preview and download the new album on SoundCloud here: https://soundcloud.com/fifthcolumn/sets/the-south-austin-moonlighters-ghost-of-a-small-town-release-date-july-12-2016/s-CAqkQ

This press release was issued on behalf of the news source, who is solely responsible for its accuracy, by Send2Press Newswire. To view the original story, visit: https://www.send2press.com/wire/the-south-austin-moonlighters-to-release-their-brand-new-studio-album-ghost-of-a-small-town-on-july-12-2016/