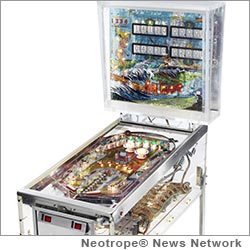 SAN FRANCISCO, Calif. /California Newswire/ — The Pacific Pinball Museum (PPM) proudly announces the recent purchase and delivery of the Visible Pinball Mark III to the Exploratorium of San Francisco. The Exploratorium's acquisition marks the first such exhibit to sell from PPM's unparalleled collection of pinball-related science, art and history exhibits.

The Visible Pinball Machine was the brain child of PPM founder and executive director Michael Schiess who worked with custom pinball designer Wade Krause to create a version of Gottlieb's Surf Champ using transparent materials: Mylar, Acrylic, PETG and Polycarbonate instead of wood to encase the game. The design preserves original gameplay and aspects of the original art. The new materials give students of science, engineering, mechanics and pinball lovers alike a clear view of the mechanisms and electrical wiring that powers the machines. While one plays the game, onlookers can watch the score reels turn, motors wind and electromagnetic coils pulse inside the machine. It has also been appreciated as an artwork, being featured in several Art Museums.

"We were just thrilled to have the Exploratorium take in one of our treasured Visible Pinball Machines," said Schiess. "There's no better home for this piece which I consider an educational work of art. Its also a real fun game to play and an eye catcher. It really draws a family in to compete against each other, and if they're not careful, they just might learn something in the process."

The Visible Pinball Machine offers a window into a time before electronics, when electricity driven mechanics powered pinball. Viewers can get an idea of how huge banks of switches and other crude logic circuits were miniaturized into electronic circuit boards.

"We are absolutely thrilled at your offer to sell us the original visible pinball machine. Thanks again for making this such a special part of our gallery," Mike Petrich, of the Exploratorium's Learning Studio, said.

The Exploratorium is adding the Visible Pinball to its Learning Studio, the heart of research and development for the Tinkering Studio. The Exploratorium recognized pinball's family friendly qualities along with its ability to teach about physics, electricity, probability and other important scientific concepts. Pinball's inherent interactivity allows players to learn while having fun and performing their own experiments — in perfect resonance with the Exploratorium's established mission.

The appearance of the Visible Pinball Machine at Exploratorium helps continue the PPM mission to teach art, science and history through pinball and preserve this important part of American culture.