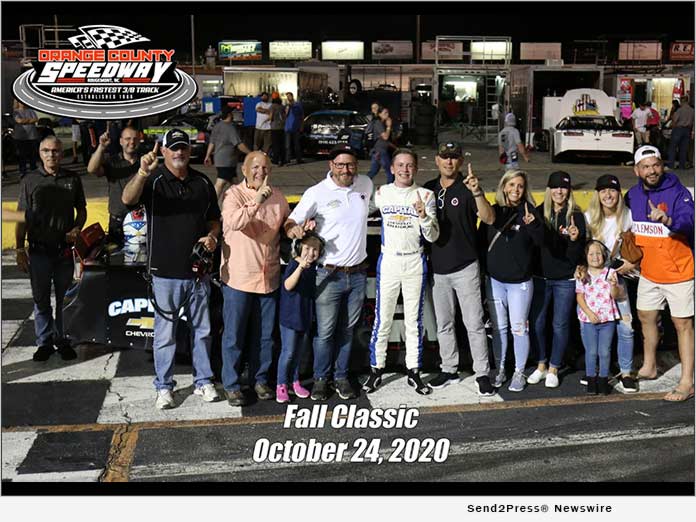 Battling the best of the best in the region, Cox was able to dominate the night in his Chad Bryant Racing Late Model at the 3/8-mile asphalt oval. Despite qualifying sixth, Cox was able to quickly head to the front and take control of the event early and never look back, leading the most laps in the 75-lap Late Model division race.

“This was a huge win for me and the Chad Bryant Racing team,” said Cox. “My goal is to keep winning and my dream to make it all the way to the NASCAR Cup Series. I’ve had the opportunity to work with some of the best coaches in the motorsports industry and I’m truly blessed for their guidance not only this weekend but their support over these last few years.”

Under the leadership of team owner Chad Bryant, Cox was able to put on a clinic in his second race with the Mooresville, N.C. team. The 2016 ARCA Menards Series championship team was able to build on their debut together at Southern National (N.C.) Motorsports Park and accelerate the results quickly by hoisting a trophy.

“I’ve been around a lot of talented drivers in my career and William is certainly going to turn heads and make statements,” offered Bryant. “We’re proud of his success at Orange County and look forward to seeing him strengthen his resume not only next year, but down the road too.”

Earlier this year after spending three years of competing in Karts, Mazda Miatas and Legends Cars, Cox was presented with the next challenge in his racing endeavor – the chance to begin testing a Late Model Stock.

Following a successful test and with a dedicated crew behind him, Cox took the next step in his Motorsports path and left his success in the Legends Car behind.

At the tenure age of 15, it didn’t take long for people to notice the talent of Cox behind the wheel of a Late Model.

By June, he joined the Carolina Pro Model Series with DLP Motorsports and running a limited schedule with Dexter Canipe of 3D Motorsports. A month later he was in Victory Lane at the historic Tri-County Speedway.

Since the win, he has continued to hone his skills at the legendary Hickory (N.C.) Motor Speedway – battling some of the best Late Model drivers in the country, adding crucial laps behind the wheel to his growing resume.

Touted as one of the youngest rising stars on track with the driving style of an experience veteran, Cox is certain to continue to attract attention entering the next phase of competition in the CARS Tour in 2021.

Formed in the fall of 2014 by owner Jack McNelly, the CARS Tour was built out of the remnants of the former Pro Cup Series. The CARS sanctioning body, continuing a desire to create a viable option for quality pavement racing throughout the Carolinas and beyond, formed the dual division CARS Tour.

This press release was issued on behalf of the news source, who is solely responsible for its accuracy, by Send2Press Newswire. To view the original story, visit: https://www.send2press.com/wire/teenage-sensation-william-cox-wins-fall-classic-2020/