LOS ANGELES — The Temecula Valley International Film & Music Festival formally invited Starving for Gravity to play a music showcase on September 20th. One of the hottest buzz bands on the scene today, SFG used to play cover tunes four hours a night — sort of like another act named after an insect. Obviously, they’ve come a long way from those days. Originally from Grand Forks, N.D., SFG worked as a cover band entertaining drunks, bikers, and girls gone wild. That gig financed their first album of original material; and, caught the attention of 79 Volts Management in California. After signing a management contract and moving to the Golden State in 2007, SFG began pursuing their dream. In the process, these indie rockers transformed from a bar band to a buzz band. But, it didn’t come easy. 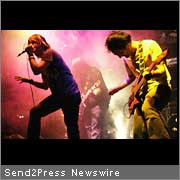 They experienced culture shock and the harsh realities of the music business. They learned that it was more than just about their music. Their performance, image, and even what they said on stage was scrutinized by industry. And, initially, they didn’t make the cut. “We thought it was over,” the band members recall. But their managers, Joshua Weesner and Alex Kravetsky, weren’t about to give up. They enlisted industry professionals and made them part of the team.

A few months later, things turned around. The band started winning contests that raised their profile, including the LAMN JAM Rock Music Contest and a worldwide competition for a spot in a Rock Against Diabetes concert in Las Vegas, NV. There, SFG got to play with rock stars and superstars, even joining Guns N’ Roses’ guitarist, Ron “Bumblefoot” Thal on stage to play “Sweet Child O’ Mine.” Thal praised SFG, “Seeing those guys playing their hearts out, and being there for the right reason, was inspiring… They were the positive spirit of the show.”

Now, Starving for Gravity will be gracing the stage at the Temecula Valley International Film & Music Festival. Selected after a year-long showcase series, they’ll be performing in front of film and music luminaries, as well as their home town crowd. It’s been quite a journey for this young band; and quite a transformation.

More information about the band: http://MySpace.com/starvingforgravity .