LOS ANGELES, Calif. /California Newswire/ — Golosio Music Publishing (www.golosio.com) is just a few months old but it has discovered a new way to expand its catalog of songs. The rhythm tracks for a new groove song were created in the Los Angeles studio of John Scott G and then sent to Golosio songwriters, Doug Colosio in Redding, California, and James Sotelo in Portland, Oregon, where two different melodies were created. 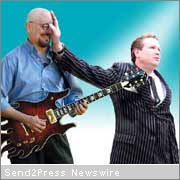 “Presto, two songs from one,” states G. “The beat is the same, but these two writer/performers invented themes and textures that take the tune in unusual directions.”

Many of the songwriters in the Golosio company have expressed interest in this form of serial songwriting. “Now that we know this is an enjoyable project for everyone, we’ve decided to create an entire album of songs where there are at least two unique perspectives to each tune,” G added.

Both videos contain images and film clips from the 1940s and 1950s, intercut with modern images to create a kind of “surrealistic art in motion,” states a spokesperson for FookMovie. There are also satirical titles and many sudden “shock cuts” and subliminal images scattered through the videos.

For more information about song licensing or to commission the creation of a new song, contact John Scott G at 818-223-8486.