At what point are you Old? Is it 50, 60, or maybe 90? And who decides that you are Old? Society, your children, your Doctor or yourself? And what kind of old are we talking about? Body age? Emotional age? Brain age? Generational age? Experiential age? Is it age or maturity?

Our bodies are all growing older from the time we are born. Minute by minute, second by second. But we all mature at our own rate. Obvious and too simple, or is it?

I felt really old when I turned 21. I’d finally made it to legal adulthood. I was so much older than the two 17 and 18 year old giggly teens standing behind me in the supermarket. But, the clerk took one look at the three of us and told us we couldn’t buy the bottle of wine I had with my groceries. I produced my ID card and pointed out that I was 21. She just laughed and said she wasn’t fooled by my fake ID. My balloon of perceived maturity was shot down by my youthful appearance and the proximity of apparent peers.

Perception plays a big part in the definition of who is older and who is not. Is my 73 year old friend who is bedridden and suffering from Parkinson’s older than my 86 year old friend who drives like Dale Earnhardt, out-walks, out-eats, and out-thinks all of us? If you didn’t know their real ages, you would say “Yes.”

Hormones are another factor in the question of who is old. When I was in my 20’s and 30’s, the only time the checkout boy didn’t ask me if I wanted help to my car was when the weather was bad or he had his eye on someone he was more attracted to. In my 40’s and 50’s the number of offers dwindled. In my 60’s, I had to practically beg for help. In my 70’s, I don’t dare stand still with my cart or someone will ask me, with concern, if I need help or if they can find something for me.

And suddenly people are talking baby talk to me. “Can I help you, sweetie?” “It’s over with the carrots, darling.” Just because I’m older than your grandmother doesn’t mean I am experiencing a second childhood or that they have given me a furlough from the senility ward.

Societal stereotypes also determine who we perceive as old. The media, including ads, TV programs, movies, literature and the Internet portray older adults as either Ken and Barbie with gray hair and no wrinkles, or as pitiful, forgetful and cranky old geezers and crones. And many a novel or newspaper article talks about an elderly adult, age 62, who is barely able to care for themselves. This elderly person also is so out of touch with society and the real world it’s a wonder they even feed themselves. 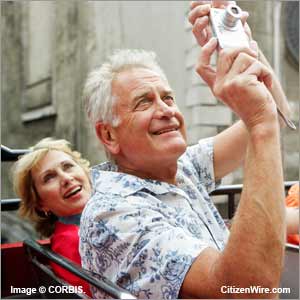 I grew up with Elvis, I have a few Iggy Pop CDs. I even know who Miley Cyrus is and have watched a few episodes of Hannah Montana. I’ve read most of the best selling novels of the last 50 years. And a few that never made it on the Times 100 best list. I don’t Facebook, twitter or text – out of choice. Not because I don’t have a clue. I don’t run around with my cell phone plastered to my face. Not because I don’t have friends, but because I prefer to meet with them over my mochacino.

Truthiness. Sure, some elderly people fit into many preconceived notions of old age. On the other hand, most of the “elderly” I know have aging bodies that aren’t as agile as they once were, but their true selves are as young as they were in all the previous years of their lives. It’s like a good book, well worn, but the pages are all there and many more are added each day. And you have access to all the pages. Sometimes you forget a page or two, but sometimes you also remember those same pages. Just like the movie you saw last week.

Age is not just in the eye of the beholder but in the mind of the individual. There is a lot of truth in the statement that you are as old as you think you are. Six year old Jerry asks questions about life and the world that his parents can not answer and have never even considered. “Where does he come up with that stuff?”, they ask. 96 year old Edna is wondering if her new outfit will catch the eye of Raymond when she goes down to lunch today. She is still looking for a second husband. Is Jerry “too young” to be wondering about how God hung the moon? Is Edna too old to be thinking about sex appeal? Of course not.

We are all growing older. Change happens to everyone whether they want it to or not. The world is changing, our bodies are changing. We can either fight it or go with the flow, experiencing life as we live it. Today is the day we have, so be glad and rejoice in it.

Article is Copr. © 2010/2017 by Anne Wynn Cox – all rights reserved. This article originally appeared on CitizenWire-dot-com before making its permanent home here on CaliforniaNewswire.com.