LOS ANGELES — Scrum Club, a not-for-profit organization, announced today that they have begun pre-sales of their first fundraising product, a card game titled “Corporate Espionage.” This game represents a battle between freshly-funded start-up companies who all have similar ideas and are entering the same target market. Each company must ramp up quickly in order to compete, and when that fails, take out the competition by any means necessary. Touted as the first business educational card game, Scrum Club is hoping to launch an entire line of products based around this new franchise, the proceeds from which will benefit local charities and support developing business communities.

“We go to tons of tech social events. It’s hard to make a connection, let alone separate the schmoozers from the geniuses. Corporate Espionage is a test of smarts and strategy. The most dynamic marketing guy and geeked-out developer can get trumped by a recruiter who understands how to build a team and work with stock options. It’s just a deck of cards, but it tells you a lot about who you might want to do business with,” said Scrum Club Director and Executive Producer, Amanda Abelove. 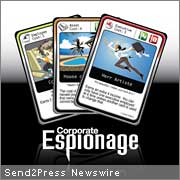 About Corporate Espionage
Corporate Espionage, the first product released by Scrum Club, is a completely original card game for 2 or more players. Players must use business skills and savvy to get an edge on the competition with the ultimate goal of driving competitors to bankruptcy. Each deck consists of 80 unique cards with vibrant hand drawn illustrations and humorous quotes. Future expansions are planned for the game in the form of stand-alone themed expansion packs.

About Scrum Club
Scrum Club is a new project management association that wants to teach people how to, metaphorically speaking, “throw down” and fight to get a project delivered on time, in scope, and under budget. The group addresses the need of business professionals to understand how to manage a project across multiple teams and functions, including software development. The group is piloting the program in Los Angeles, California, and will then make the program available for free to other people who want to start a chapter in their local area.