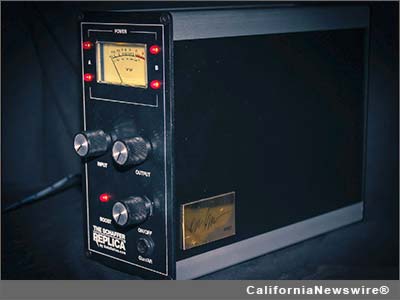 LOS ANGELES, Calif. /California Newswire/ — Attention all Tone Junkies! Famous Youtuber/Axeman SoloDallas will be unveiling two new Schaffer Replica™ Guitar Effects based on the original Schaffer Vega Diversity wireless system designed by Ken Schaffer in the mid 1970s. The Original SVDS was created by Ken Schaffer around 1975 and it was the first reliable wireless systems ever created. Early adopters of the SVDS include Rock & roll Pioneers like AC/DC, Black Sabbath, Aerosmith, Van Halen, ZZ Top, Fleetwood Mac, Foreigner, Foghat and many, many more. During the late 1970s and early 1980s over 1,000 units were sold.

Tone Secrets Revealed and the new era of the Schaffer Replica™

“I decided to go through all of the interviews with Angus Young that had ever been published, again, one more time,” said Fil “Solodallas” Olivieri, Creator of the Schaffer Replica, “and finally found the direct question asked in a 1984 interview ‘…do you use any effects?’ Angus Young’s reply was ‘I just use the Schaffer-Vega wireless system. For me, it’s probably the best.’”

He added, “That answer clicked because though the Schaffer-Vega is a wireless guitar system, Angus Young talked about like it was an effect. After several months of exhaustive research I learned the Schaffer-Vega system introduced a process called ‘companding.’ A compander (or, compressor-expander) was built into the system with a powerful clean boost.”

The folks at SoloDallas managed to track down a few of the last working Schaffer Vega units, cracked them open, reverse engineered them and have created two new modern, non-wireless, guitar-effect versions dubbed the Schaffer Replica™. Both versions capture and replicate that fat Classic Rock tone that helped shape and define an entire generation of Rock Music. After years of research, tweaking and tinkering in secret labs the Classic Rock tone of the original SVDS is available again in 2014! “We’re not emulating the tone… We’re replicating it!”

The Schaffer Replica™ faithfully reproduces the audio section of the original device responsible for some of the fattest, most recognizable and successful guitar tones ever heard.

The Schaffer Replica™ is a non-wireless guitar effect that comes in two different versions:

The Gold Tag (GT Edition), Presented in a black, vertical cabinet reminiscent of the original Schaffer-Vega System Receiver “63EX?, and signed by the original inventor, Ken Schaffer, on a brass tag. Full analog circuitry, a 1:1 faithful replica (minus the FM transmission circuitry). It is switchable ON/Standby by the provided foot-switch cable. MSRP $550 USD.

The Pedal Version is an SMD format miniaturized version of the above, packaged as a stomp box, and provides the same powerful sound to its user. MSRP $280 USD.

The Schaffer Replicas will be on display at the 2014 NAMM Convention in Anaheim at Booth 3395.

About SoloDallas:
SoloDallas.com is a community of over 12,000 registered members with like-minded taste for classic rock music featuring gear, playing and recording techniques for the international bedroom rocker enthusiast.

Editor Note: this content is based on a press release, as provided by the news source: SoloDallas – information is believed accurate but is not guaranteed.