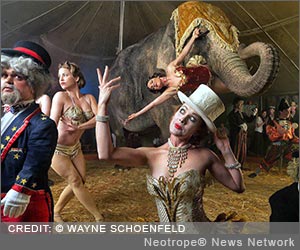 At the LA Circus "back lot," where the TV series "Carnivale" and the film "Water for Elephants" were shot, Schoenfeld brings 150 actors, extras and professional circus performers together, including Tai the smartest Elephant in the world and World Figure Skating Champion and Olympian, Tai Babilonia.

Shot in Schoenfeld's "Tableaux Vivant" style, "Circus of the Heart" represents the third in his Icons/Iconoclasts series of circus photographic exhibits. Since 2007 the series has exhibited in U.S. and European museums and Festivals. Parts of the series are also included in "Cirque du Soleil's" private collection and have been seen audiences worldwide.

"Circus of the Heart" will include a 3D film crew who will be capturing Stereoscopic footage for a future project Schoenfeld is producing, a 3D television pilot called "Sawdust."

Would you be the one who will get the chance to be on this major production?

Wayne Schoenfeld The Circus Comes To Town
Watch this video on YouTube.