Like every conservative, Trump uses words to fool the dim-witted. Here is a quick peek at the hidden meanings behind some of the Trump blather, bunk, baloney, hokum, hooey, and humbug. 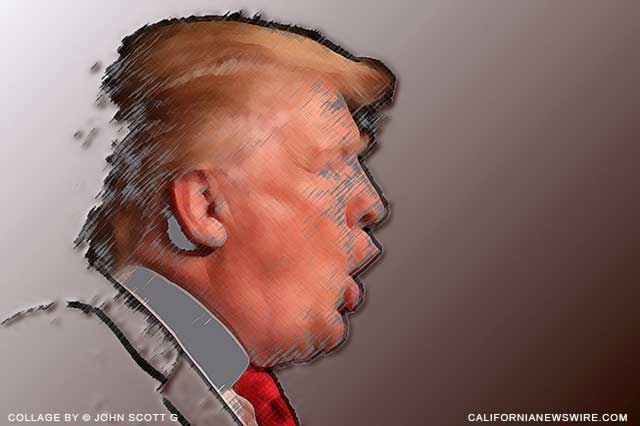 Although this phrase has always been a part of political speechifying, it has emerged as one of Donald Trump’s specialties (although he often pronounces it “buhlieve me”). When Trump uses this phrase it means, “I made up the crap I just said a moment ago but I think you’re too stupid to know better and you’re definitely too lazy to go look up the facts.”

This is absolutely true — if by landslide you mean that you lost the popular vote and eked out an Electoral College victory.

Yeah, yeah, yeah, we know the story you’d like us to accept: that you were born poor, raised alone in the wilderness, and succeed by grit and determination. And now here you are, attempting to make the USA cuddle up to Vladimir Putin, one of the world’s great despots and crooks. Yes, dear Donny, you truly represent The American Dream. But getting your start in business with a multi-million-dollar “loan” from your family makes you a Richie Rich, not an Average Joe.

The Trumpster probably thinks it means “I’m letting you in on a little secret” but in reality it means “The lie I just told you sounds like it could be true so we’ll just leave it at that.” To people like Donny Doofus, words are sometimes used as a kind of verbal drumroll to call attention to the speaker’s supposed importance.

Trump says this whenever he’s asked about something he said that is suddenly inconvenient. When called out on it, Trump says, “The media is so dishonest. Buhlieve me.”

It is impossible to know what the conservative base of morons and bigots thought Mr. Hair-Do meant by that statement. Normal and decent people thought it meant he was going to rid Washington of lobbyists. But in addition to welcoming lobbyists, Trump has embraced liars, cheats, plutocrats, greedwhores, and the woefully inept. Trump’s cabinet appointments are an odious cabal of such anti-Americans as Rex Tillerson, Rick Perry, Steve Bannon, Betsy DeVos, Jeff Sessions, Steven Mnuchin, and other denizens of — and believers in — the Fox Fake News Network, NotVeryBrightBart, WorldNutDaily, and InfoMars. Don-Don, you’re not draining the swamp — you’re pouring on several extra-thick double-sticky layers of putrid scum.

For the Trumpster, this means “I saw something on the Internet and it matches the conservative crap I’m currently spouting, so now I’m repeating it and you people are so dense you might just buy it — and speaking of buying, let me tell you about some great deals on Trump ties, Trump water, and Trump steaks.”

Well, okay, we’ll give Trump that one because it’s right up there with The Beatles’ “Ob-La-Di, Ob-La-Da.”

First of all, just let me say: ew. Next, it should be noted that Trump won the votes of people who like to claim that they believe in “family values.” And again: ew.

Well, no, not everybody thinks the way you do — just everybody who squeezes inside the hermetically-sealed ignorance-bubble surrounding the Trumpster Diving Team.

It’s hard to know where to begin on this one. We could mock him by making similar statements, like this one: “The concept of gravity was created by defense contractors to make guided missiles more expensive.” Or this: “The concept of methamphetamine was created by sofa manufacturers to keep Americans away from the gym.” But perhaps sarcasm isn’t needed in this case because the Trumpster’s statement is just so incredibly f#@king stupid.

Hmm, there’s something odd about that Trump statement. What is it? Oh I know: it is truthful! Sorry, I just wasn’t expecting that.

American Board of Cosmetic Surgery Raises the Bar for Patient Safety