Alien life forms in unidentified flying objects swoop past earth from time to time, just checking things out. As one might expect of highly advanced beings, they are not pleased by what they see. 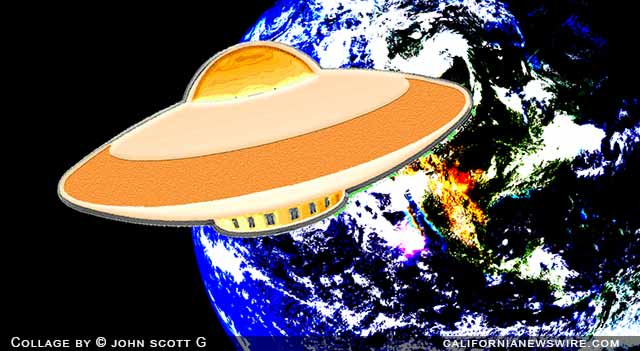 When visitors from distant galaxies turn their attention to our little blue planet, how do you think they react? Usually, they recoil in shock.

It’s not just because of idiotic ideas such as Faux News or the Pet Rock. The so-called civilized world has a long list of embarrassments that have sent the space travelers packing.

Consider what the alien beings found as they assessed life on Earth:

They checked in during the Inquisition and left in horror. They dropped by during the Crusades and departed in disgust. They approached during the Taiping Rebellion, the Mongol Conquests, World War I, World War II, the An Lushan Rebellion, the Dungan Revolt, the Conquests of Timur-e-Lang, the Russian Civil War, and the Napoleonic Wars — and each time they scurried away.

As one of the UFO pilots said, “Nulla eu diam urna.” (Translation: “We are afraid of earthling irrationality and violence.”) Another of the alien ship captains muttered something that sounded like “Proin porttitor sapien vitae sodales bibendum.” (Translation: “Many of your fruits and vegetables have very large pits.”) It is impossible to argue with their positions.

We in the USA have had more than our share of outrages, many of which repulsed the extraterrestrial visitors. Time after time, aliens took a peek at the New World and were appalled by an array of wretched behavior:

First, there was that little genocide thing that we unleashed on Native Americans. That was followed by two hundred fifty years of slavery. Oh, and the Civil War, reconstruction, the era of Jim Crow laws, the Viet Nam war, and the Iraq War. Not to mention abominations like Richard Nixon, Henry Kissinger, Ronald Reagan, the 1st Bush mistake, the 2nd Bush mistake, Dick Cheney, and Donald Rumsfeld.

One of the UFO pilots looked at the people whose names darken that list and said, “Ut eleifend nisi ut congue cursus.” (Translation: “You guys sure like a lot of douchebags.”)

Are We Getting Better?

Space aliens have examined the USA in the past thirty-six months and have recoiled from such conservative policies as:

* GOP racism and discrimination against blacks, Hispanics, immigrants, Muslims, and the LGBT community

And this very special litany of horror:

The rightwing nutjobs in that last bullet point prompted a comment from the leader of the alien forces: “Aliquam cursus nisi sit amet est ullamcorper.” (Translation: “You have got to be f#@king kidding me.”)

After assessing the actions of conservatives in the last few years, the leaders of the advanced civilizations sent a message to the people of Earth: “Curabitur facilisis enim dolor, sit amet tempor dui condimentum eu.” (Translation: “Only when you inoculate humanity against rightwing evil will we return to give you all the secrets of the universe.”)

So there you have it. We can continue tolerating the pestilence known as conservatism, or we can eradicate the rightwing hordes and be rewarded with a better world.

Regular readers of his column know where I stand: Earth must stamp out conservatism so we can finally learn the mystery of eternal life! Not to mention finding out why mangos and avocados have pits that are too damn large.