Donald Trump claims credit for anything he sees as positive. The media keeps falling for this con, dutifully passing on Trumpster’s false and misleading braggadocio. 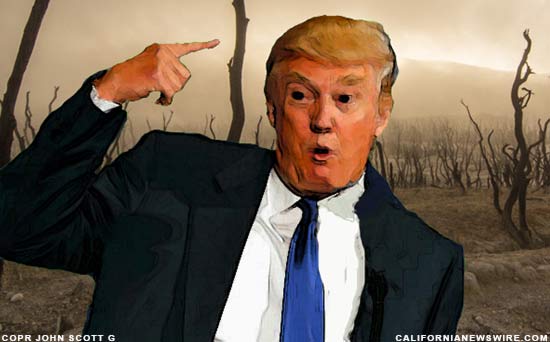 Editor Note: this is a satirical article.

“Thanks to my hard work, you are all able to continue breathing while staying on the earth,” Donald Trump tweeted early this morning. A spokesliar for the Trump team clarified that The Donald was referring to the continued existence of oxygen on the planet as well as the fact that the law of gravity has not yet been repealed.

The new president then congratulated himself in his own tweet, adding, “Thanks, Donald Trump!”

This tactic seems interesting and I’m going to try it immediately. Here goes: “What a superb opinion column today. Beautiful writing! Congratulations, John Scott G!” (Yeah, okay, I see why he does it. That felt good.)

While I made up Trump’s “air and gravity” tweet, there is a disturbing litany of distortions, prevarications, flip-flops, and outright lies by the Orange One.

For example, he was in favor of the U.S. committing war crimes in terms of torture, then he was against it, and now that the election has been stolen, he’s back on the torture bandwagon — putting our troops in greater danger all around the world.

Another example: the Trumpster falsely claimed credit for “saving” hundreds of jobs at a Carrier manufacturing plant in Indiana. In the real world, the citizens of Indiana will be paying millions of dollars to Carrier — money their multinational corporate parent will receive in lieu of moving those jobs (and we also have to ignore the fact that hundreds of other Carrier jobs are still leaving the U.S. for Mexico).

Another example: Trump trumpeted that Fiat-Chrysler “just announced plans to invest $1 billion in Michigan and Ohio plants, adding 2,000 jobs,” conveniently overlooking the fact that this was simply part of a plan Ford had revealed more than one year ago.

And another example: Not long after the Russian-hacked election, Trump boasted that he had convinced Ford to keep a Lincoln SUV manufacturing facility in Kentucky. Great news — except for the fact that Ford had never intended the factory to be moved in the first place.

I am not the only one who is jumping on Trump’s tactic of FCCFS (falsely claiming credit for stuff).

Take a look:
1) National Association of Cooking: “We invented fire.”
2) Kite Manufacturers of America: “We invented electricity.”
3) U.S. Bathtub and Shower Stall Designers: “You have us to thank for water.”
4) Starbucks: “We created Wi-Fi.”
5) Pizza Makers Guild: “Home delivery is our concept.”
6) North American Coffee Distributors: “Congrats to us for creamer, half-and-half, sugar, the thermos, and the breakthrough idea of putting a lid on cups containing hot liquids.”
7) Adult Entertainment Association: “We came up with sexual intercourse. You’re welcome.”
8) Conservatives: “We pioneered treasonous behavior in the House, Senate, elections, and the more aromatic parts of the Internet.”