Banners, billboards, placards, posters, buttons, and bumper stickers are part of political campaigns and protests. We talked with a sign printer to see what messages are popular with liberals and conservatives. 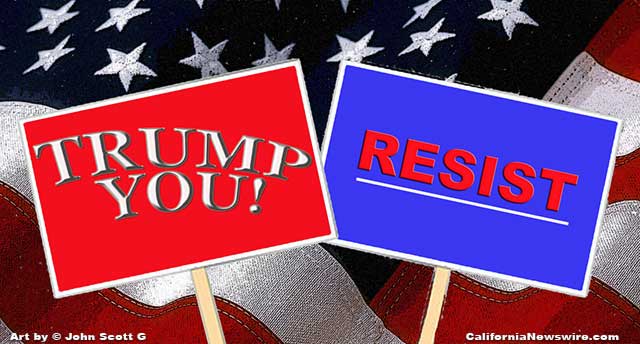 Editor’s Note: this is a satirical article. No actual interview took place.

“How long have you been printing political banners and posters?” I asked.

“Nearly thirty years,” the man said. “And my dad did it for many years before that.”

“Do you specialize in one political party?”

“I see. But you have another company that works with conservatives?”

“And what’s that one called?”

“Makes sense,” I said. “So, what can you tell me about the trends in what you’ve been printing lately?”

“Well sir,” he said, “during the campaign, things were positive for the progressives and angry for the conservatives, but now it’s reversed.”

“Leading up to the election, the progressives ordered banners about ‘Togetherness’ and ‘Unity’ and ‘Moving Forward’ and the conservatives wanted things like ‘Trump That Bitch’ and ‘White Power.’ But now the conservatives want ‘Togetherness’ and ‘Unity’ while the progressives are asking for ‘Resist!’ and ‘Say No to Fascism’ and ‘Stop Hate’ and things like that.”

“I notice that you have a lot of ‘Lock Her Up’ banners left over.”

“Yup, sure do. Those, as you know, were for the conservatives. But now the progressives are adopting the slogan and so ‘Lock Him Up’ is what we’re printing.”

“I can’t help wondering something,” I said.

“Are you, yourself, involved in politics? I mean, do you lean toward one side or the other?”

“I notice you’re printing a sign that says ‘She Won the Popular Vote’.”

“So the fact that Hillary got more votes than Trump doesn’t bother you?”

“Nah, the republicans stole the election fair and square.”

“I see. Does the anger in some of the signs ever get to you?”

“Sure,” I said. “I’m looking at some of these: ‘Kill a Conservative for Christ,’ and ‘USA Took a Trump,’ and ‘The World Got Trumped.’ Those seem to be a bit ornery.”

“That’s nothing,” he said. “Look at this one.” He showed me a banner with the letters RWNJDARFF on it.

“I don’t know what ‘RWNJDARFF’ means,” I told him.

“Oh. You’re right, that does seem even angrier.”

“You bet. But none of that bothers me at all.”

“So there aren’t any problems working for both sides of the political spectrum?” I asked.

“Not really,” he said. “Each of my companies has policies that protect us.”

“What are those policies?”

“When you’re printing something for the progressives, you make sure to get all your costs covered up front.”

“And when you’re printing something for the conservatives?”

“With conservatives, you make sure to get the entire payment up front. You never ever know with those people.”

‘The New American State’ Is Now Available in Kindle Unlimited