In her public statements, Ivanka Trump says her deranged and bigoted father is actually a good guy who has elevated the political debate this year. She has not yet said if she also believes the earth is flat and the moon is made of green cheese. 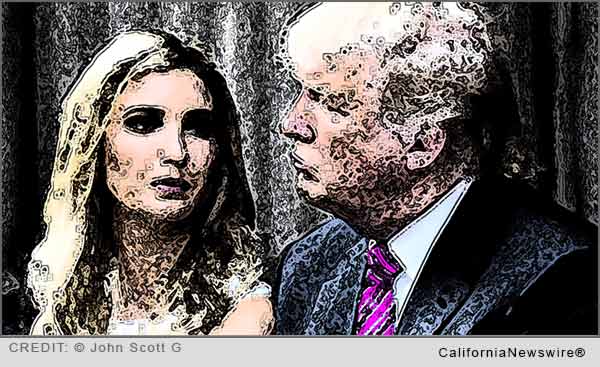 Trump voters and other conservatives are not my first choice for conversation, primarily because of my allergies. I break out in hives when confronted by wacky conspiracy theories, distortions, prevarications, and the rest of the right-wing’s made-up crap.

Oh, I also react badly to their racism and their fascism and their misogyny and their xenophobia and their desire to fiscally rape middle-class Americans. But hey, that’s just me.

However, when I was invited to meet with an operative who works inside the super-secret “Trump for Il Duce” movement, I decided to check it out.

Following the hush-hush instructions that were delivered by drone, I entered the Trophy Room Bar at 8:30 one evening. I spotted my contact immediately. He was a big, beefy guy in a rumpled suit, slouched on a bar stool with several upside-down highball glasses in front of him.

I turned to see a trim and well-dressed young woman with a cup of coffee in her hands.

“Um,” I said in some confusion.

She led me to a booth against the back wall.

“No problem,” she said. “Everyone does that. Now, what did you want to ask me?”

“Well, I’d love to get some perspective of what things are like inside the Trump campaign.”

“All right,” she said. “I will be happy to provide you with some information from within the Campagna per installare Donald Trump come dominatore del mondo.”

“Sorry. The campaign to install Donald Trump as ruler of the world.”

“Right. We’ll be calling it that now, too. So, how are things going?”

“Like the fundamental ignorance of the candidate?” I politely inquired.

“Well, that goes without saying,” she noted. “But at the moment the big problem is Mr. Trump’s progeny.”

“You’re telling me. We call them the children of the corn from the village of the damned.”

“The rest of the world does, too,” I assured her.

“Right. Anyway, we know the media is going to have a field day with the Ivanka Trump statements.”

“You know, where Ivanka said that her father was just being genuine.”

“Exactly, or Putin,” she said.

“Or Attila the Hun.”

“And next thing you know,” the operative continued, “Ivanka is saying that Trump has ‘elevated’ the political conversation this year.”

“Yeah,” I said, “that was strange. By the way, does she say ‘Trump’ or does she use a term like ‘Daddy’ or something familial like that?”

“Actually, she says ‘Daddykins’ most of the time.”

“Right. Or ‘Mr. Hair-Do’. Or sometimes she’ll say ‘Herr Trump’ but only when she’s really angry with him.”

“Well, Ivanka praised daddykins’ honesty, saying that even if you don’t like what he says, you have to respect the fact that he’s only saying what people are thinking.”

“Only despicable people are thinking some of those things,” I pointed out.

“Obviously,” she agreed, “but the point is that Mr. Trump is speaking honestly what some people honestly think, no matter how repulsive it may be. Ivanka then said — wait, I’ve got the quote right here — she said, ‘I think people respect the fact that he is bold enough’.”

“Apparently,” she replied. “And then Ivanka went on to say that he’s opening a dialogue around issues.”

There was a pause in our conversation. “Well,” I said at last, “what if a candidate said out loud what a lot of other people are thinking, namely that Trump and his ilk should be parboiled on a prime time pay-per-view television event. Would Ivanka feel that was also opening a dialogue around issues?”

The Trump operative stared at me for a long and tense moment as she considered what I just asked. “That is very provocative,” she said. “Actually, it’s quite interesting,” she mused. “Are you thinking big, like HBO or Showtime?”

“Well,” I said, somewhat surprised at the turn this conversation was taking.

“Because I could see that,” she said. “Maybe $99.95 for standard definition and $109.95 for high-def.” She got out her phone and used the calculator app. “I could get behind this,” she said. “A lot of us could very much get behind this.” She looked up and fixed me with a no-nonsense stare. “So tell me,” she said, “what kind of profit split are we talking about here? Because I’ll tell you right now that Ivanka and her brothers are not going to settle for anything below seventy-five percent.”

“After all,” she said, “we’re talking about conservative principles here.”