Time for some pithy observations about the 2016 race for the U.S. presidency from a great scholar and lovely woman, political historian Alicia Sarah Hitler. (You didn’t think we meant that other Hitler, did you?) 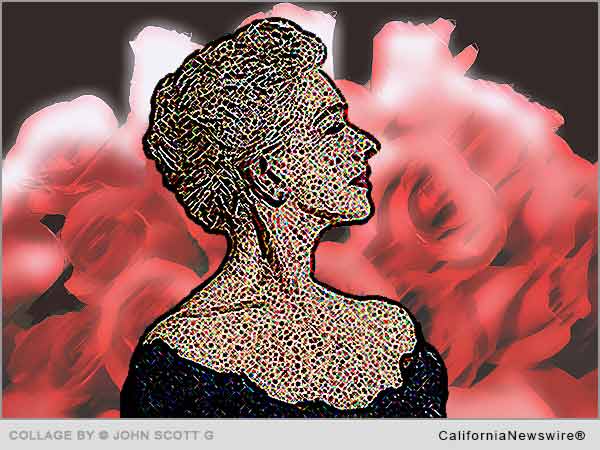 One of the best-kept secrets in California politics, Alicia Sarah Hitler has boundless enthusiasm for the democratic process and is happy to reveal a cornucopia of fascinating opinions about many of the figures and stories in the news today. We met at her lovely Pasadena home and enjoyed an hour-long conversation while sipping tea in her garden.

JSG: Have you always been interested in American politics?

ASH: Oh no, that didn’t happen until I was thirty. That’s when a cousin ran for city council and lost because his opponent smeared him as a socialist. And I had two questions about that. Here’s the first, how do we as a so-called enlightened nation allow smear campaigns to happen?

ASH: True. Fear and prejudice, both of which result from ignorance. If we ever figure out how to get the facts to the electorate, smear campaigns and the Conservatives will be finished forever.

JSG: Do you really think education would accomplish all that?

ASH: Well, it sure couldn’t hurt to try.

ASH: Why are American voters so dumb as to react badly to the word “socialist” when we are a democratic-socialist country? No, don’t answer. Of course it’s a problem with ignorance again. People don’t learn about democracy and socialism in school and they just don’t bother to think when they’re grown up.

JSG: I’ve talked to a lot of adults who actually deny that America is a democratic-socialist nation.

ASH: Precisely. Quite a few Americans are functional idiots. They send their children to public schools, they use roads and bridges, they put out their garbage for weekly collection, they use the water and sewage systems, they use the post office, and through it all they’re protected by the military, police, fire department, and the Centers for Disease Control and Prevention — every one of these an example of democratic-socialism.

JSG: But one political party wants to mess up all of those things.

ASH: Conservatives always attack the very things that help us the most. It’s funny but these people pay exorbitant fees for healthcare all their lives and then they go kicking and screaming into the democratic-socialism of Medicare but once they get there they say, “Hey, this works pretty well!” But they belong to a party that doesn’t want everyone to have access to efficient, effective, and lower-cost healthcare. Every other advanced nation has a variation of “Medicare for all,” but not the United States.

JSG: We can be a silly country sometimes.

ASH: So true! It’s just inanity and greed. The United States is obviously a democratic-socialist country but we have a huge political party dedicated to fear-mongering about the term while also legislating to make sure we do it as poorly as possible. It’s madness.

JSG: Agreed. Let’s turn to the political figures of the day. Can I ask your opinion of Donald Trump?

ASH: Yes. He’s a combination of Mussolini and excrement. Today is a different era but it appears to be the same person. You know, you look at the newsreel footage of Mussolini and he seems to be a buffoon, but that’s because we know he was eventually shot and hung upside-down above a service station by his own people. When we look back at the Trump GOP Conservative fustercluck of 2016, we will laugh at the stupidity of millions of so-called good Americans supporting this travesty of a man. The chilling thing is that those millions of morons are around us all the time. And they’re ready to support a bigoted, bloviating, bullying, bastard if he’s entertaining enough and makes enough promises to the crowd. It’s sad. Don’t you find it sad?

JSG: Yes, but there are challengers.

JSG: How would you describe Hillary Clinton?

JSG: Do you think that will happen?

ASH: We may get a sane Senate but a competent House seems unlikely in her first term but maybe the country will have provided a glimmer of education to the Conservative hordes by her second term.

ASH: In the age where a remedial student like Paul Ryan can lead the House and a traitor like Mitch McConnell can lead the Senate, anything is possible. But the country is going to be lucky to get 52 or 53 sane senators and 190 competent members of the House.

JSG: And 60 are needed to prevent filibuster obstruction in the Senate, and 218 are a majority in the House.

ASH: Exactly. Seems unlikely we’ll reach those levels. Too many moronic and racist GOP voters out there.

JSG: What is your view of Bernie Sanders?

ASH: Oh, poor Bernie. He’s the only major party candidate who sees we’re doing democratic-socialism rather badly and has the guts to propose policies that would lift the country into the twenty-first century. But he’s not going to be president. He was doomed from the start.

JSG: Not a big enough base of support at the beginning of his campaign?

ASH: Bernie’s fate was sealed twenty years ago when he decided he didn’t need to reach out to leaders in the African-American community. He thought that his record of being for civil rights — marching, protesting, getting arrested, and so forth — he thought that was good enough. But he forgot about the personal interaction part of running for president.

JSG: He has been reaching out in his campaign…

ASH: Certainly, but Hillary was reaching out her entire life. When the mayor of Flint, Michigan, needed to talk to a powerful person about how the Republicans were poisoning the water supply of an entire town, she took out her phone and called Hillary. She didn’t have to search for contact information — she already knew Hillary. The outreach had been going on for Hillary’s whole career. Bernie’s a good guy but he overlooked the personal connection.

JSG: I see what you mean.

ASH: You know, if Bernie had gotten even forty percent of the African-American vote in the Southern primaries he would have locked up the nomination in April.

ASH: Oh yes. To be fair, Bernie probably didn’t think he’d ever be running for president. Plus, he’s from a state that has, what, seventeen black people and nine Hispanics.

JSG: Any predictions about the presidential race?

ASH: Trump will get forty percent.

ASH: Oh sure. The idiot vote is strong in America. Remember, fifty-nine million people voted for McCain/Palin. Mush-mouth and mush-brain got fifty-nine million votes! And it was worse four years later when sixty-one million morons voted for Romney/Ryan. Unfit Mitt and Lyin’ Ryan. A vulture capitalist and a man whose budgets prove he cannot do basic math. It’s a travesty.

JSG: It would be easy to be pessimistic about the American electorate.

ASH: Yes, but not if the smart people work together. We have the ability to wipe the anti-humanity forces off the political landscape. We, the people. Remember how vast numbers of the populace decided that they didn’t want Congress to pass SOPA, the restrictive anti-piracy legislation? [Stop Online Piracy Act.] The congresscritters were initially for it but they changed their minds right quick when faced with the angry letters, phone calls, texts, tweets, postings, and emails from we, the people.

JSG: Power to the people?

JSG: Does the media bear some responsibility for today’s state of affairs?

JSG: Still, I keep reading dire predictions of the possible Trumpification of America.

ASH: Trump is a very nice man whose friends are all purchased and whose workers would like to see him perish in a plane crash. But the Conservative message is something like this: “Enough with the increase in jobs, enough with the growing prosperity, and enough with the equal rights stuff, let’s take the country back to the nineteen fifties or even the eighteen fifties.”

JSG: So you are confident of a Hillary victory in November?

JSG: Any chance for the Libertarian ticket?

ASH: No. Look, all Conservatives are right-wing nut-jobs and a Libertarian is just a nut-job with an unwarranted superiority complex.

JSG: Finally, a personal question. You have steadfastly refused to change your name and you’ve continued to use it professionally even after you married. What are your reasons for that decision?

ASH: Why would I change my name? I think Alicia is quite pretty.