Bombshell revelations of sex and drugs! Oodles of behind-the-scenes rumor and innuendo! Here are the totally true but entirely fabricated diary entries from high-ranking or perhaps nonexistent members of the right-wing nut-job bigot brigade. 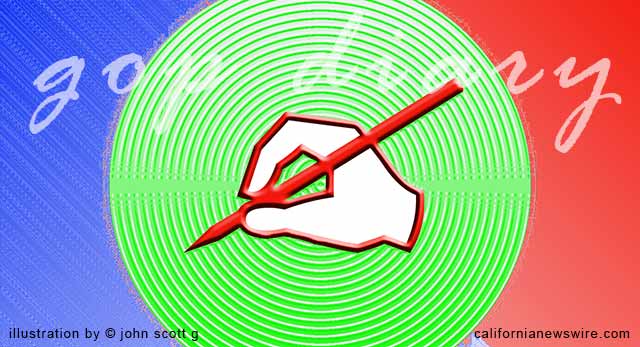 At great expense and no small amount of personal danger, we have managed to obtain secret private diary entries from the bowels of the presidential campaign trail.

I hear you asking, “Whose hush-hush diaries have been compromised?” Well, it’s juicy. We have uncovered the confessions and musings of political operatives working with contenders for the nomination from the party that represents Al-Qaeda in America.

They stagger into their hotel rooms at the end of a long day of prevarication, smearing, distortion, and bloviating. After downing a couple drinks and taking some hits of medicinal cannabis, they pour out their feelings in their diaries. Oops, I mean their “notes for a novel from inside the political machine.”

So, grab your nose-plugs and Dramamine while we take a peek at what GOP flacks, hype artists, and fear-mongers have been thinking all through the end of 2015 and during the first part of 2016:

* Got hired to work on the Trump campaign!!!! Too bad he’s such an ignorant asshole.

* Does anyone on the right even have half a brain anymore? There are people who are voting for inanimate objects like Jeb and Carson. And let’s not start on the animated objects like Christie and Trump.

* Adorable! That’s the word that best describes Marco Rubio, that fresh faced young conservative who is trying to look grown-up. Wait, did I say adorable? I meant something else. Perhaps the correct word is — Awkward!

* Mexicans, women, veterans — another day, another Trump slur. What next? Will he start in on Muslims and Jews?

* How to describe the image of Marco Rubio appearing in one of his expensive big-boy suits? And then watching as he actually uses multi-syllable words to describe matters of which he obviously has no comprehension. Sick. On an upbeat note, we scored some excellent China White yesterday. Bring on the hookers!

* Excuse me, but DreadTed is not a good choice for America.

* Watching Little Marco’s face of idiocy as he wastes the time and money of the body politic is icky. More than a little disgusting. And when he drops out, he’ll still be a Senator. And still considered a viable candidate “somewhere down the line.”

* When people listen to conservative candidates, they throw up a little in their mouths.

* Wow, who was that lady coming out of Rubio’s hotel room last night? Wish I had thought to ask her if he really was “Little Marco.”

* How can anyone with actual human values and an I.Q. above 80 ever vote for a republican? But glad glad glad that their Daddy Warbucks backers are keeping the river of green flowing. So nice to be employed. But wish these people had some decency and morality instead of just using those words from time to time.

* Apparently, when it comes to domestic and foreign policy, Trump doesn’t know anything! WTF is going on with this stupid campaign season??!?

* The young boys who keep going in and out of Cruz’s hotel rooms are causing eyebrows to be raised.

* Cruz doing that phony preacherman style of talk. Guess it works on jesus freaks but for most people it’s just embarrassing.

* Romney came out against Trump and Trump’s polls go higher. Thanks a lot, Mitt.

* It is not true that John Kasich is the most boring thing on the campaign trail. I saw a freshly whitewashed fence the other day and wondered what it would be like to stand there and watch it dry. But I didn’t have to because I can watch Kasich.

* Senate GOP is pulling down the republican party with this SCOTUS stupidity. Mitch McConnell is repeating his nonsense about obstructing the Constitutional procedures for a SCOTUS nominee. Perhaps time has come for an intervention. Or give him a dose of lithium.

* Paul Ryan for president? RUFKM? The little putz can’t even do basic math. And if that guy has fully read Ayn Rand’s garbage novels then I’m King Henry VIII.

* Oh right, Kasich or Ryan or Mitt or E.T. will swoop into the convention and get the nom. Yeah, that’ll happen without a fuss. Like the guy says in Butch Cassidy: Morons. I’ve got morons on my team.

* Saw a Kasich aide reading “Geo-Politics for Dummies.” He was moving his lips. Still, better than the Trump and Cruz people. They can’t read at all.

* Speech notes: “My friends, through my veins runs a deep and everlasting love! A love of the United States of America, a love of the Holy Bible, and a love for the guns that enable us to defend them. I love the fact that we can pack heat everywhere we go except for our campaign events. I also love women, especially with their dedication to the cooking and cleaning and raising the children. I love our immigrants, the legal ones, the taxpaying ones, the ones that behave themselves, the ones that recognize Jesus Christ as their Lord and Savior. I love voters, just as long as they can find several ways to prove they are voters. I love sweet Jesus, and I resent and even hate it whenever anyone points out His teachings are similar to the Democrats instead of the Republicans. But I am filled, my friends, with love. I love everybody. Why, I even love the nig — the blacks, as long as I can keep them in my sights! Lately, we are under attack. Yes, yes, it’s true. But notice that we are able to counter-attack! With made-up rules, with ALEC-written legislation, with obfuscation, and with prevarication. Those things, coupled with the lack of voter turnout and a general run of apathy and ignorance among the general population, means that I know we shall prevail! Gentlemen, I am proud to say, and I hope you will join me in speaking this with head held high: I am today’s Conservative Republican!” Wonder if TC will finally have the guts to do the damn speech the way we’ve written it.