What’s with the Putin-loving people of the Trumpservative Party? “There is no connection between Donald Trump and Russia,” said the Trump spokesperson emphatically. “None. Nada. Zip. Ziltch.” 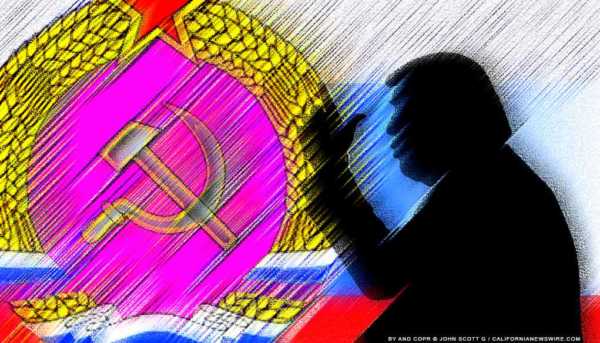 Editor’s Note: this is a satirical article. No actual interview took place.

“So,” I asked, “Trump’s razor-thin victory in the 2016 election wasn’t in part due to actions from the former Russian Soviet Federative Socialist Republic?”

“That’s right,” he said. “There was no involvement by Rossiyskaya Federatsiya. None whatsoever.”

“Wait, what? Did you just say Rossiyskaya Federatsiya?”

“I’m pretty sure you said–”

“And also about how there’s no Trump-Russia connection,” I prompted.

We were meeting for lunch in a restaurant known for dishes from around the world.

“Good idea,” I said, catching the eye of a waiter. “I’ll have the Spanish omelette, please.”

“I’ll have borsht,” he said. “And the beef stroganoff.”

“No,” he said. “Now, what did you want to ask me about the incoming Trump apparatchik?”

“Oh, right,” I said. “Well, what can you tell me about how some of the Trump campaign staff had ties to Putin and to factions in the Ukraine?”

“Look,” he said, “there’s nothing to tell. The media comes up with these crazy stories sometimes, but that’s all just fantasy.”

“Right,” he said. “Like the people say, it is the merest of dust bunnies wafting with permission through the people’s airspace above Chernobyl.”

“I don’t know anyone who says that,” I pointed out.

“You will,” he said ominously. “Meanwhile, try some of this Wodka.”

I stared at him for a moment. He seemed unconcerned. I decided to try continuing the interview on a different topic. “Okay,” I said, “can you give me some idea of the plans Trump has for working with Paul Ryan and Mitch McConnell?”

“They know,” he said ominously.

“This isn’t clearing things up at all,” I protested.

“Well,” he replied, “it’s good to have a little suspense, don’t you think?”

“Suspense is fine in a mystery novel but not so nifty in a nation’s policies towards the economy, labor, finance, manufacturing, equality, voting rights, human values…”

“Sure, all that’s good. Great, even. That’s all terrific stuff. But look, there are big plans for America and the Trump administration expects respectful behavior from members of the Politburo.”

“See this pen?” I asked. “It’s a digital recorder. Listen…” I played back part of our conversation. It was quite clear that he said Politburo.

“Wait, you’re saying that a writer proving something is just some sort of media trick?” I said incredulously.

“How do you figure that?” I asked.

“It is eerily reminiscent of a show trial.”

“Or a re-education camp.”

“Not yet,” he said ominously.

Why would a Russian-Jewish couple, living near Boston, return to the Soviet Union in 1931?